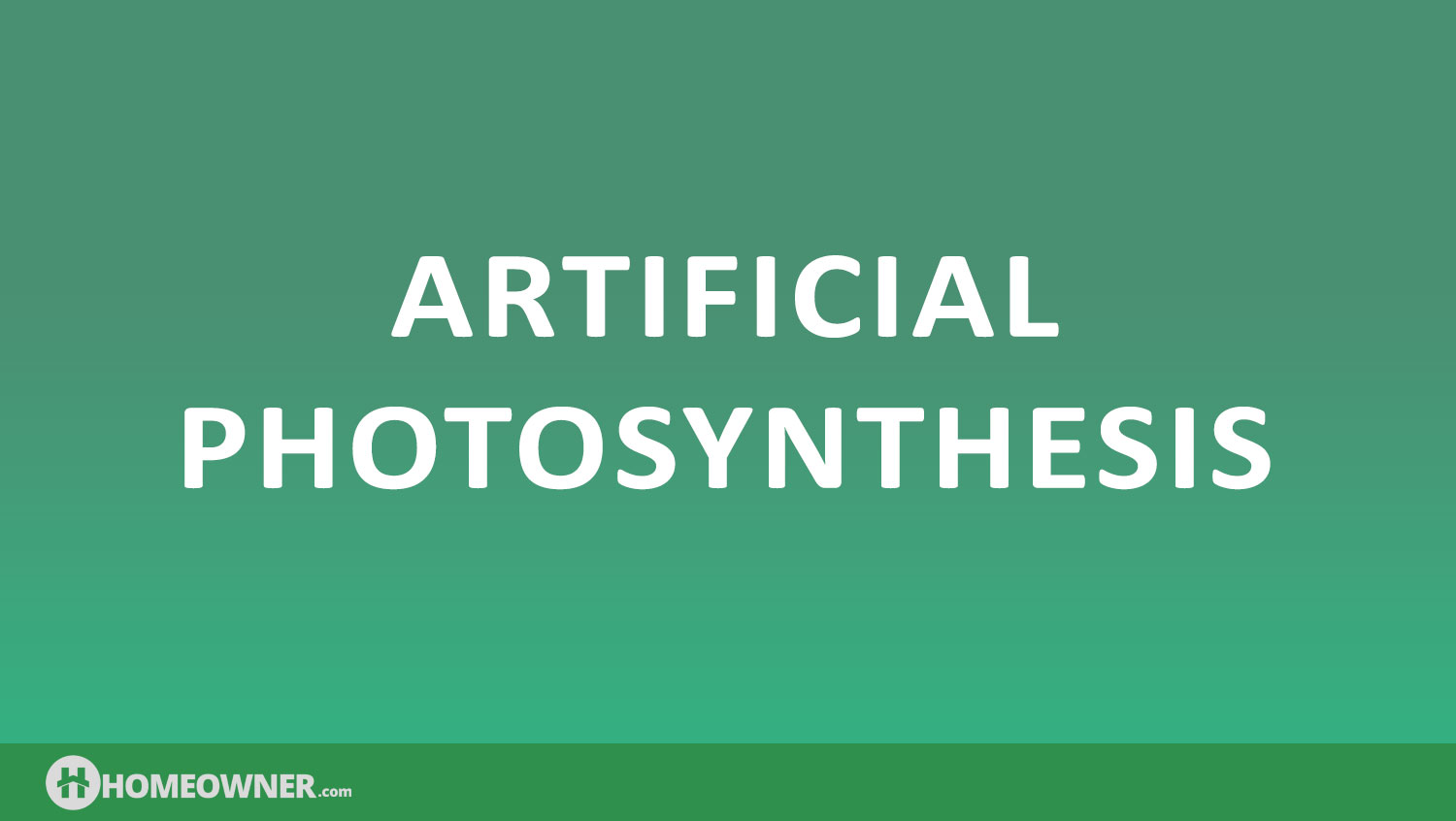 2.4 billion years ago, photosynthetic cyanobacteria, or blue-green algae as they are sometimes erroneously called, terraformed our planet into the habitable oasis we have come to call Earth. They absorbed sunlight and carbon dioxide and released oxygen, transforming Earth's reducing atmosphere into an oxidative one, shifting the balance of life in favor of more complex oxygen-loving organisms like ourselves.

Today, another organism is poised to shift that balance in the opposite direction. Humans and their penchant for burning fossil fuels have already unloaded an unprecedented amount of CO2 into the Earth's atmosphere.

Since it was photosynthesis that instigated the climate change that gave our ancient aerobic ancestors a chance in the past, it is probably fitting that a little biomimicry could solve the climate and energy woes of today.

What Is Artificial Photosynthesis?

Cyanobacteria and plants use photosynthesis to make their own fuel from nothing more than CO2, water, and the sun's rays. Artificial photosynthesis is therefore any process that attempts to mimic nature by chemically storing solar energy inside of a fuel.

Artificial photosynthesis also includes any technologies that attempt to replicate any part of the photosynthetic process.

The term is often used to describe a variety of technologies, including the photocatalytic splitting of water into hydrogen fuel and oxygen gas, the use of photosynthetic microorganisms for biofuels, or the complete biomimicry of the photosynthetic reaction process to create chemical fuels.

Why Use Artificial Photosynthesis

Conventional solar power, which involves the direct conversion of photons into DC current via the photovoltaic effect, is mired by costly materials, intermittency issues, cloudy weather, and the need to store electricity in a battery. Photosynthesis in nature may just hold the answers to all of these problems.

The advantage to creating a fuel is the ability to use existing piping infrastructure, and easily store energy for use when sunlight is unavailable. The protein complexes from photosynthesis could also be used to replace costly rare earth metals used in conventional solar cells, driving costs down.

How Does Photosynthesis Work?

The first step in biomimetics is to understand the phenomenon we are trying to replicate. Nature has devised a number of nuanced ways to draw power from the sun, the most well-known being chloroplasts. Within the chloroplast are small disk-like structures called thylakoids surrounded by a fluid-filled space called the stroma.

Photosynthesis can be divided into two stages, light-dependent reactions in the thylakoid and light-independent reactions which take place in the stroma. In most photoautotrophs, organisms that make their own food using sunlight and CO2, thylakoids capture energy from the sun using two types of photosynthetic reaction centers

These photosystems work in tandem to produce the energy that will later be used in the light-independent reactions in the stroma to create fuel. The photosystems consist of a complex of specialized proteins, pigments, and other cofactors. The main cofactor in most photoautotrophs is chlorophyll, the pigment that makes leaves green and is responsible for absorbing red and blue light.

When a photon strikes a chlorophyll molecule, it excites the electrons to a higher energy state allowing them to be scooped up by electron carrier proteins in the cell's electron transport chain. Let's take a closer look at the molecular machinery behind photosystems I and II.

The names photosystem I and photosystem II are paradoxical, and are only due to the order in which they were discovered. Since the electron pathway starts at photosystem II, we will be starting there first.

When a photon hits photosystem II it excites an electron to a higher energy state causing it to leave the reaction center of photosystem II and enter the electron transport chain. The deficit in electrons is regenerated by an oxidative process called photolysis which strips electrons from water to create hydrogen and oxygen gas.

The high energy electrons that left photosystem II power the pumping of hydrogen ions from the stroma into the thylakoid to create a concentration gradient. This gradient powers a protein called ATP synthase which phosphorylates ADP to form ATP, an energy carrier that will be used in the light-independent reactions. The energy-depleted electrons leave the electron transport chain and enter photosystem I.

When a photon strikes photosystem I, the electrons are re-energized and passed through the electron transport chain to a specialized protein called NADP reductase, which reduces NADP+ to NADPH, the second energy carrier molecule critical to the light-independent step of photosynthesis.

Light Independent Reactions in the Stroma

The ATP and NADPH produced from the light-dependent reactions in the thylakoid can now be subjected to a process called the Calvin Cycle which uses ATP and NADPH to reduce carbon dioxide and produce the carbohydrate glyceraldehyde-3-phosphate. The cycle consists of three steps, the first of which is carbon fixation. In this step, CO2 is fixed to ribulose 1,5-bisphosphate.

While it is amazing what photoautotrophs have been able to accomplish with photosynthesis, simple sugars are not quite energy-dense enough to fuel the demands of human society. Scientists and engineers are taking the blueprint of photosynthesis and scaling it up to human industrial needs.

In terms of energy systems, it is clear that artificial photosynthesis research must focus on three areas: light harvesting complexes, proton-coupled electron transfer, and redox catalysts. In the simplest biomimetic approach, this involves using a photosensitizer, a water oxidation catalyst, and a hydrogen evolving catalyst.

When a photosensitizer is hit with a photon it oxidizes, transferring photoexcited electrons to the hydrogen catalyst. This drives a reduction reaction whereby the water splitting catalyst strips electrons from water to fill the deficit in the photosensitizer just as in nature.

Meanwhile, the hydrogen catalyst receives the energized electrons from the photosensitizer and the free floating protons from the water splitting step and generates hydrogen gas (H2). The key to artificial photosynthesis lies in finding the right catalyst to drive each step of the reaction, and deciding whether hydrogen fuel is the end goal, or fixing carbon dioxide and generating useful hydrocarbons is preferred.

In order to replicate photosystem II, researchers are interested in catalysts that facilitate the electrolysis of water when excited by a photon. Some of the best candidates for solar activated water splitting include manganese, dye-sensitized titanium dioxide (TiO2), and cobalt oxide (CoO).

Manganese is the natural world's catalyst of choice for light activated splitting of water, so it stands to reason that creating an industrial catalyst based on manganese is the most direct approach to mimicking the magic of photosynthesis.

In practice, this involves embedding manganese complexes within a Nafion matrix to produce nanoparticles of manganese oxide. In this form, the manganese catalyst can more readily be integrated into a photochemical cell.

Titanium dioxide (TiO2) is the photocatalyst of choice for dye-sensitized solar cells. The anatase form of this crystalline mineral owes its strong oxidative potential to the positive holes within its atomic matrix.

Doping the oxide with carbon can greatly improve titanium dioxide's efficiency in cleaving the hydrogen-oxygen bonds in water. Adding disorder to the lattice structure of the surface layer of TiO2 nanocrystals can also broaden the spectrum of light absorption to include infrared.

When it comes to hydrogen generation from the photocatalysis of water, conventional catalysts usually require additional reagents and external biases to produce stoichiometric amounts of hydrogen and oxygen gas.

In 2013, researchers at the University of Houston discovered that Cobalt Oxide (CoO) nanoparticles were capable of decomposing water under visible light without the need for co-catalysts, reagents, or other additives. Current state of the art water splitting devices sport low solar-to-hydrogen conversion efficiencies, on the order of 0.1% but these CoO nanoparticles achieved 5% conversion efficiency in the lab.

As a relatively new discovery, it will likely be some time before we see the first photochemical cells using CoO in the field. However, the initial test results have the artificial photosynthesis community excited.

Since photoautotrophs evolved in a reducing environment, virtually all photosynthesis in nature relies on the inefficient enzyme RuBisCO as part of the Calvin Cycle. It wasn’t necessary for natural selection to evolve a better catalyst because of the abundance of CO2 in the environment.

RuBisCO is too slow for industrial processes, only sequestering a few molecules of CO2 per minute into ribulose-1,5-bisphosphate per minute. Researchers are instead turning to metal catalysts like transition metal polyphosphine complexes which are still in development but aim to be able to reduce CO2 from air at atmospheric pressure at a faster rate.

Photoelectrochemical cells or PECs are mankind's best attempt at artificial photosynthesis. Solar cells are used to power the electrolysis of water to produce hydrogen and oxygen gas. In its simplest implementation, incoming photons excite four surface electrons of a silicon electrode, which in turn flow through wires to a stainless steel electrode where they split four water molecules into two hydrogen molecules (H2) and 4 hydroxide ions (OH-).

The four OH- groups pass through the liquid electrolyte back to the surface of the silicon electrode and refill the four electron holes created when the previous four photoelectrons left the cell. This results in the production of two water molecules and two oxygen molecules. The direct conversion of sunlight into a fuel makes PECs a near mirror image of the photosynthetic process.

Dye sensitized solar cells are low cost solar cells that combine a photosensitized anode with an electrolyte to create an artificial photosynthetic system. In the most common implementation, a porous layer of TiO2 nanoparticles is impregnated with a molecular dye that absorbs a targeted spectrum of light.

The TiO2 layer is immersed in an electrolyte solution and forms the anode of the system. A platinum cathode is placed on the other side of the electrochemical cell completing a circuit. The oxidation reduction reaction is driven by the photoexcitation of electrons within the dye, and the semiconducting layer serves as the scaffold which supports a large number of dye molecules in a 3-D matrix increasing the amount of active material per surface area of the cell.

By itself, the dye sensitized solar cell mimics the photoexcited locomotion of electrons within the thylakoid of a chloroplast. To completely mimic photosynthesis, the current produced by the cell can be used to power the electrolysis of water into hydrogen and oxygen gas. However, power from a dye sensitized solar cell can just as easily be stored in a battery or integrated directly into the electrical grid, as with conventional solar cells.

While most researchers are content with making hydrogen, some scientists are taking biomimetics of photosynthesis a step further by making carbon fuels from the sun. The company Joule Unlimited has genetically engineered a bacterium that can take CO2 out of the atmosphere and secrete useful hydrocarbons.

Not to be confused with biodiesel, which must be refined in a batch process to create fuel, helioculture involves using photosynthetic microbes to directly produce ethanol, olefins, and other hydrocarbons without the need for further refining. The key is to manipulate the genes related to enzymatic mechanisms within microorganisms that enable the direct synthesis of these fuels.

The Future of Artificial Photosynthesis

One approach to artificial photosynthesis is to replace the expensive semiconductors in photovoltaic cells with the isolated protein complexes of photosystems I and II to create cheaper and renewable solar cells.

In August of 2014, researchers from the Ruhr-University Bochum (RUB) in Germany revealed that they had successfully transplanted photosystem 1 (PS1) protein complex from a cyanobacterium into a solar cell.

The discovery marks the first time a semi-artificial leaf was able to transfer photoelectrons faster than "natural" photosynthesis. Mankind has never been closer to unlocking the power of photosynthesis for human use.

The future of artificial photosynthesis is looking bright.