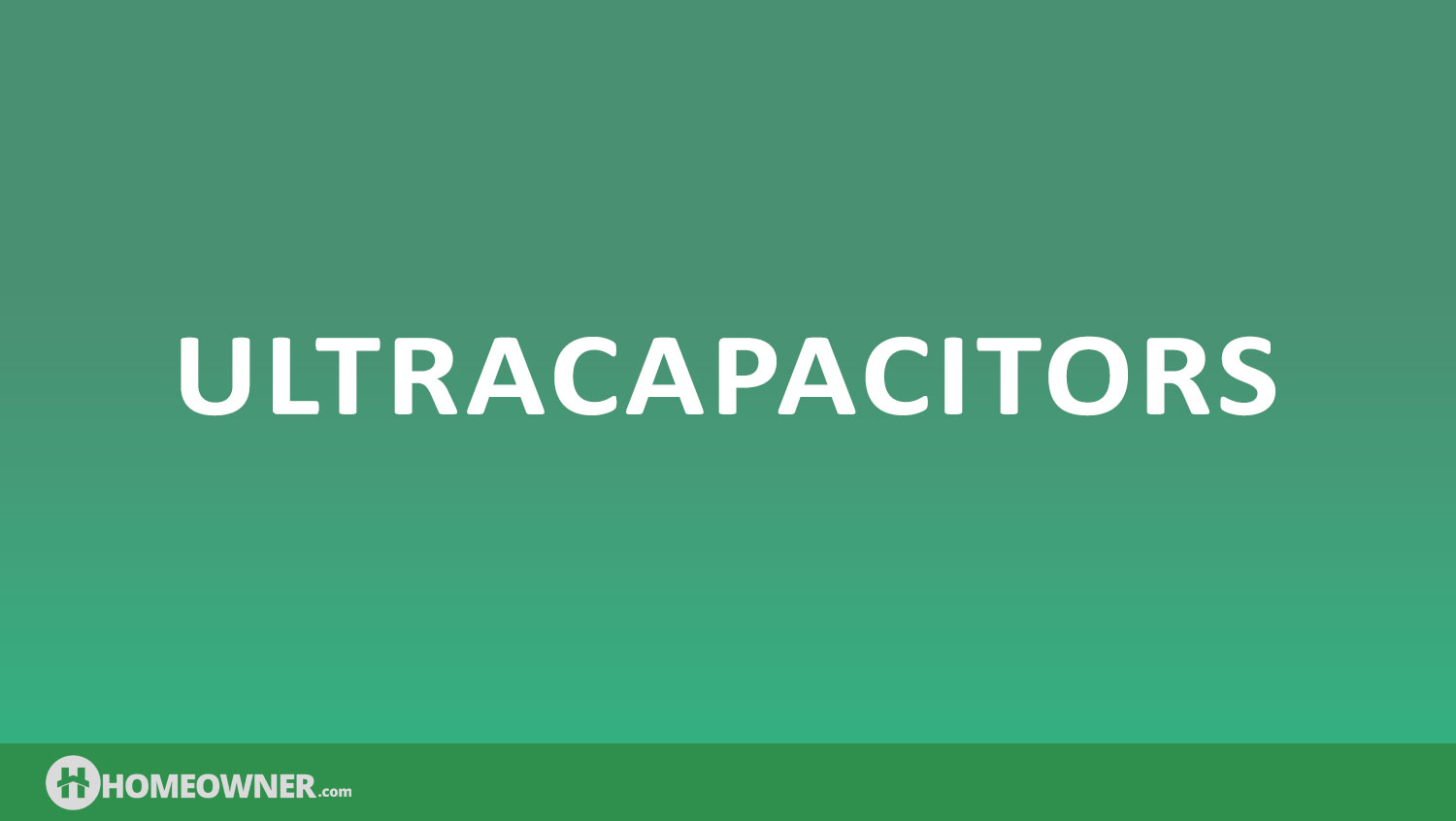 With all the modern convenience of today's society, it is tough to think about what it would be like to go back to a world without electricity. As populations grow larger and more people gain access to luxuries like electric light, mobile phones, computers, and other advancements in modern technology, it is becoming increasingly more important to find new and efficient ways of storing electrical energy.

What is an Ultracapacitor?

You may already be familiar with the battery, a chemical form of energy storage that can store large amounts of energy but takes time to charge and discharge. Some of you may even have heard of capacitors that feature near instantaneous charge times, but have tiny energy capacities.

What if you wanted to store large amounts of energy, but also needed the fast charge and discharge times of a capacitor? Enter the ultracapacitor, also known as a supercapacitor, a relatively new technology that is right on track to achieving the best of both worlds.

In order to fully understand where ultracapacitors lie on the energy storage spectrum, it is helpful to understand how we traditionally store electrical energy in a capacitor.

Capacitors store electrical energy via a completely different mechanism than batteries. While a battery stores energy chemically in the chemical bonds of oxidation reduction reactions, a capacitor can be said to store energy electrostatically inside an electric field.

If that sounds a little esoteric, don't worry, if you've ever rubbed your socks on the carpet to zap someone in cold weather or rubbed a balloon on your head to stick it onto a wall, you've experienced firsthand the underlying principles behind electrostatic energy storage.

How does Electrostatic Energy Storage Work?

A capacitor consists of two electrical conductors separated by a dielectric; it stores energy using static electricity. When a voltage or potential difference is applied across the conductors, positive charges collect on one plate while negative charges collect on the other and an electric field is developed. Let's look at the various phenomena that make electrostatic energy storage possible.

Electricity is a type of energy that stems from the fundamental attraction between protons and electrons. Whenever you have electric charge in motion the phenomenon is called electric current. In a similar fashion, static electricity can be thought of as stationary electric charge.

Electric charge is a physical property of matter. When two electrically neutral materials come into contact with one another, and one of those materials obstructs the flow of current, a stationary electric charge is created. The result is called the triboelectric effect, and it causes one surface to become positively charged and the other to become negatively charged.

The material with a propensity to lose electrons in the outermost shell of its atoms lost them to the material with a propensity to gain electrons in its outermost shell. It is important to realize that static electricity is an imbalance of electric charge on a surface that results in it becoming more negative or positive. The only way for the electricity to escape is to complete the circuit and draw a current. This is why you receive an electric shock after rubbing your feet on a rug and touching a conductive metal surface.

How to Capture Electrical Energy in a Field

In a capacitor, the positive charges on one plate are strongly attracted to the negative charges on the other plate, and this attraction increases the closer the plates are brought together.

The only thing separating the charges is a thin film of plastic or carbon called the dielectric, a highly polarizable material. Internal charges within the dielectric are polarized such that the negative charges shift towards the positively charged plate and the positive charges shift towards the negatively charged plate. This creates an internal field that has effectively stored electrical energy provided by an external source.

Similarly, when you rubbed that balloon in your hair, the balloon accumulated a static charge, and your hair accumulated the opposite charge. The balloon received a negative charge from your hair allowing you to stick it to the wall where it was attracted to the positive molecules in the wall material.

Capacitors are limited by their size, to increase the capacity of a capacitor you need to reduce the space between the two conductors while simultaneously increasing the surface area of the system. Indeed a thundercloud could be considered a gigantic capacitor where opposite charges form between the cloud and the earth and the air serves as an insulating barrier.

For reasons unknown, a channel of ionized air called a leader will form during a thunderstorm and begin to trace a branching path downwards towards the ground. When the leader forms a conductive path, the electrical system discharges as a bolt of lightning strikes the ground. In practice, capacitors have a lower energy density than batteries and are most often found on circuit boards, where they are useful in managing current throughout the circuit.

The ultracapacitor achieves its superior performance characteristics thanks to a complete redesign of the electrostatic storage system. Instead of a dielectric, the ultracapacitor consists of two porous plates submerged in electrolyte and separated by a thin insulator.

The key here is the porosity of the plates which greatly increases the surface area available for holding charge. When a potential difference is applied across the two plates in an ultracapacitor, the charges line up along both sides of the insulator creating a double layer.

The electrolyte provides the charges used in this system and the insulator merely has to block the flow of charges from one chamber to the other. Note this process merely describes one type of ultracapacitor, a double-layer capacitor that stores charge via the Helmholtz Double Layer mechanism, named after the German physician and physicist Hermann von Helmholtz who first noticed the double layer phenomenon occur at the interface between electrode and electrolyte in 1853. The distance between the charges in a Helmholtz Double Layer is typically around 0.3-0.8 nm.

The second type of ultracapacitor still stores electrical energy in an electrical double layer but by electrochemical means. Faradaic electron charge transfer occurs at the surfaces of the electrodes, with oxidation occurring at one electrode and reduction occurring at the other. The difference between a pseudocapacitor and a battery is that faradaic electron transfer mechanism does not involve chemical bonds. Rather charged ions in the electrolyte enter porous electrodes via intercalation or electrosorption.

Today's ultracapacitors still don't store quite as much energy as the best batteries, but new advancements in material science like carbon nanotubes and aerogels are steadily bridging the gap.

The ability of ultracapacitors to store and discharge large amounts of energy quickly and efficiently stems from the fact that energy is stored without the forming of chemical bonds. Charge carriers stored in an electric field are inherently faster than covalently bonded chemical species in a battery.

The challenge is bringing the capacity of ultracapacitors closer to the realm of batteries. For now, ultracapacitors are ideal for situations where capacity is not a big concern and a fast rate of charge or discharge is required. Ultracapacitors are great for handling peak power demands at power plants or serving as backups to primary energy sources like diesel engines or fuel cells. Here are some of the ways that ultracapacitors are providing energy storage solutions today.

Fast charging ultracapacitors are perfect for regenerative braking systems found in many hybrid and electric vehicles. In one success story, hybrid-electric buses managed to reduce carbon emissions by 75% through the use of a combination between an unconventional fuel efficient combustion engine, an electric motor, and a regenerative braking system.

While you might be able to get away with using a battery in the regenerative braking system for a car, the high currents, heavy duty cycles, and frequent starts and stops of a high speed rail or heavy transportation vehicle require the longevity and robustness of ultracapacitors.

The energy recuperated from stopping a locomotive can be redirected to power a number of subsidiary systems that keep electric trains moving, from engine startup to grid/voltage stabilization. Ultracapacitors can also be used to help protect the higher capacity batteries during particularly peak loads, extending battery life.

If the battery shines in the area of capacity and energy density, then the ultracapacitor's forte lies in its high cycle life and power density. Power is a must in the construction industry where large cranes and mining drills need to be able to tap into an extra burst of power when the going gets tough. Caterpillar has started using ultracapacitors in its cranes to improve energy efficiency during high peak bearing loads.

The ability of ultracapacitors to survive millions of cycles is part of the reason that ultracapacitors last so long. The lack of chemical bonds in the energy storage processes of an ultracapacitor also means that the materials within the device last longer. These characteristics have made ultracapacitors a staple among electrical power grids to assist in peak shaving, load leveling, voltage control, and frequency regulation.

Ultracapacitors have seen success being used to support renewable energy systems which typically have to deal with intermittency of renewable energy sources like the sun. The pitch control systems in most windmills rely on ultracapacitors to provide the extra burst of power needed to maintain the desired rotational speed during a strong gust of wind.

Ultracapacitors can also offer a burst of energy before startup of a solar plant or switching to a backup generator during a power outage. Ultracapacitors can provide many of the same energy stabilizing services that they do for conventional power grids, and smooth the integration of intermittent renewable energy sources into the existing network.

The Future of Ultracapacitors

Ultracapacitors already have a nice niche between batteries and regular capacitors. The ultracapacitor is a new technology, and innovations in nanotechnology and materials science will likely expand the capabilities of future ultracapacitors. The Holy Grail of energy storage would be a device that has fast charge and discharge times, high number of cycles, long cycle life, high power density, and high energy density.

Since the ultracapacitor only lags behind in energy density, it makes an excellent candidate for the ultimate energy storage device. Still, a more practical future scope for research would be to create complete energy systems that use the right storage device for the job.