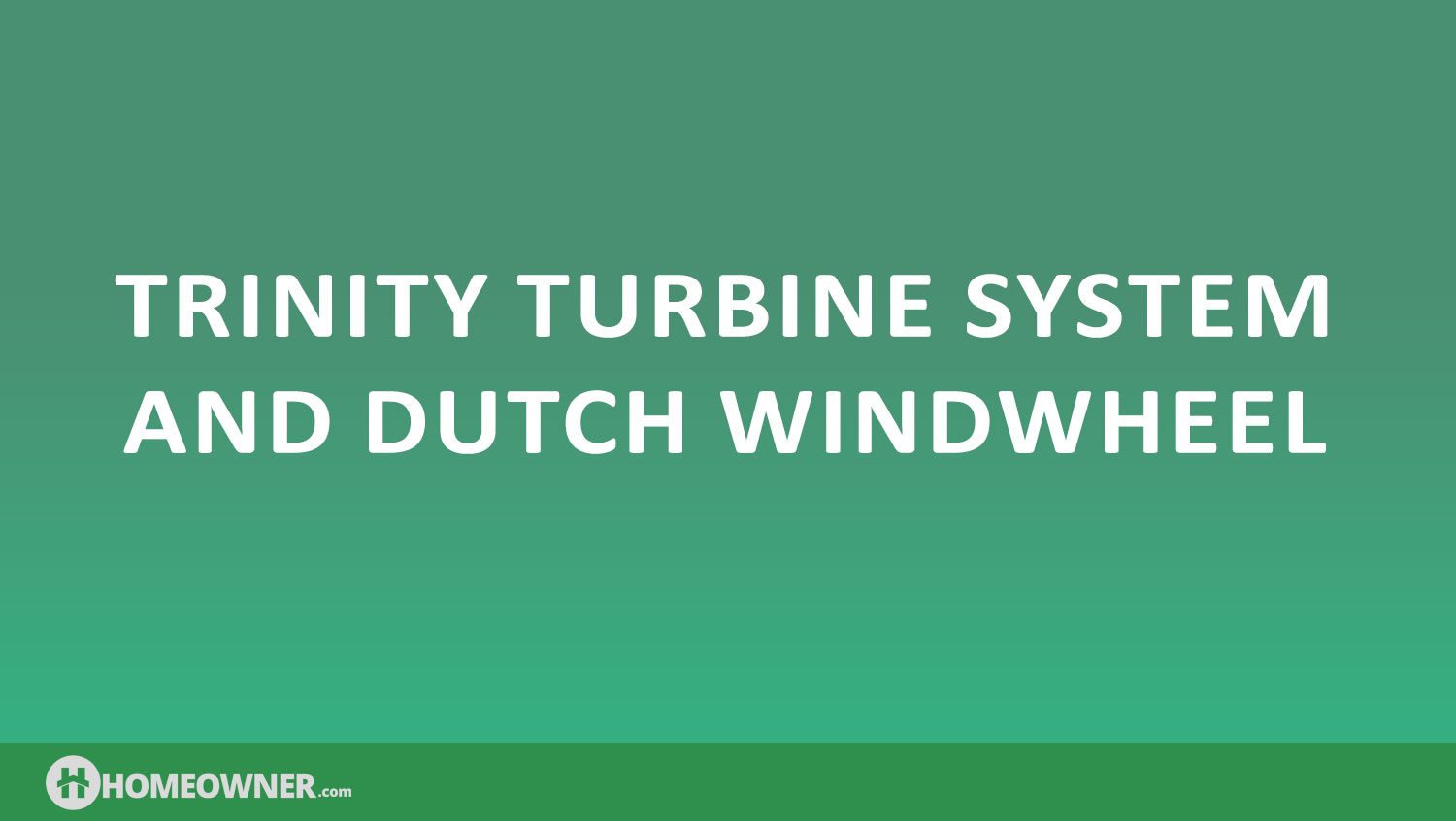 For some, wind turbines are controversial, with some criticizing the tall structures as noisy and ugly. In Minnesota, a turbine company named Janulus has taken the normally large, bulky energy generators and transformed them into a portable version small enough to carry in a backpack. Last year, Janulus was successful in getting the first version of Trinity crowdfunded. Janulus now has an entire series of turbines available in a variety of sizes. Their largest turbine is described as being able to power an electric car or a small home.

Generally speaking, energy efficiency on the go is associated with solar-powered gadgets. Lamps, phone chargers, and digital cameras are all easy to charge with solar cells and quite functional. A wind turbine. on the other hand, is not normally thought of as portable.

The turbine comes with blades able to fold into a cylinder shape, making it easy to transport. The package comes with a built-in power inverter, controller, and battery. Janulus' larger turbines can be installed outside a person's home and plugged straight into an electrical outlet as a simple, straightforward way to supply electricity without installing any additional wiring.

The new blade system is considered ingenious. It allows the turbine to be oriented horizontally or vertically, depending on the wind's speed. This new design harnesses 4 times as much energy as their previous version and makes the Trinity model useful in more situations. The small versions are remarkably lightweight and ideal for camping and recharging smartphones, etc.

The company was started by 2 brothers, Einar and Agust Agustsson. After moving to America from Iceland (Iceland is run completely on renewable energy), they were surprised by high electricity bills. They experimented, using a 3-D printer to make numerous prototypes, and then needed to find funding, which they did in the form of crowdfunding.

Janulus has done something both simple and complicated. Making something smaller is a simple concept, redesigning it to supply the amounts of electricity generated by these turbines is not. The Agustsson brothers have taken the turbine, and shrunk it down to miniature proportions, resulting in the Trinity. The Trinity is a very small, propeller-oriented generator giving you the freedom to make your own clean energy when and where you need it (providing the wind is blowing).

If you're camping on a windy beach, or want to recharge your smartphone on a windy night, there's a Trinity turbine designed for your needs. The smallest Trinity, the Trinity 50, only weighs 650 grams and fits easily inside a backpack. It is 30 cm tall when collapsed, but will generate 50 watts, and the Lithium-ion battery (7,500 mAh) holds enough electricity to recharge your smartphone up to 4 or 5 times. It can also supply electricity to a notebook or tablet.

The Trinity is described as the first commercially available, personal-sized wind turbine, although research shows this is not completely true. There is a portable generator called the E, but it lacks adjustable turbine blades and uses only the horizontal mode. Janulus' first model successfully received crowd-funding last year through Kickstarter. The brothers began shipping out Trinity models, and now they are expanding their range with four new models.

More powerful models include the Trinity 400, which can provide power to small appliances, while the Trinity 1000 supplies electricity to vans and campers. The largest of their wind turbines is the Trinity 2500, which includes a very large 300,000 mAh battery. The Trinity 2500 can recharge a smartphone up to170 times. It stands 2 meters tall when standing erect, and is designed to run a small home or charge an electric car.

A potential problem for the Trinity is insufficient wind and gusts while operating at ground level, but this has been overcome. Traditional wind turbines are located at much greater heights and Trinity users won't be able to easily or safely be able to achieve these same heights. Trinity's creators have solved this problem with the turbine’s shifting blade design.

All Trinity turbine systems come with a Lithium-ion built-in battery pack. It is quite easily replaced if a defect develops. Only high quality batteries made by a reliable manufacturer are used. Each battery comes with a two-year warranty. The very durable and powerful batteries recharge your smartphone up to 16 times with the Trinity 400. The batteries are durable and come with an inverter.

Trinity turbines come with 3 legs and 3 blades. All the external surfaces are made from a durable and sturdy plastic. The Trinity 1000 and the Trinity 2500 have a grid tie inverter, meaning the system can synchronize with the power supply used in your home, or RV, and can send electricity directly to all outlets in your home.

In an ideal world, a camping trip would include both a Trinity 50 and a portable solar cell pack. Then you could have electricity at any time, providing the sun was shining or the wind was blowing. Campfires still come in handy for some things, like light, heat, and cooking.

A 174 meter-tall windwheel (a 174 meter or 571 ft diameter) has been proposed for Rotterdam, the Netherlands’ second-largest city. It will be located in Rotterdam's harbor, nicknamed "the Gateway to Europe.” Looking vaguely like a high-tech version of the classic windmill, the Dutch Windwheel is a ring-shaped building, aesthetically inspired by the London Eye. It is being designed as a sustainable powerhouse, cutting-edge commercial hub and attractive landmark.

A trio of Rotterdam-based firms (DoepelStrijkers, Meysters, and BLOC), have invested in the project, forming the Dutch Windwheel Corporation. The 174 meters tall, mixed-use structure will be made of two glass-and-steel loops. The Dutch Windwheel is a huge circular wind energy converter that houses a hotel, apartments, and a giant coaster ride. The structure is designed to be part energy resource, part tourist attraction, and part residential building.

It should allow visitors to view the city. The cutting-edge, outer ring "coaster” will have approximately 40 rotating cabins. Each cabin will be outfitted with "smart walls,” providing information on every noteworthy sight visible from the revolving ride. The Dutch Windwheel is a very large circular wind energy converter that houses apartments, a hotel, and a giant coaster ride. The concept is designed to be part renewable energy source, part tourist attraction, and part residential building.

Holograms will act as virtual guides on 30 minute tours. Passengers will travel underwater as part of the ride. While many tourists will be attracted to the Windwheel to experience it as a unique attraction, it is meant to be a "dynamic showcase of clean technology.” It will serve as a platform for demonstrating renewable energy solutions.

Graff stated, "Our aim is to develop a building that generates more energy than it uses. And we will [employ] every innovation that can contribute to that goal.”

One possible green solution is EWICON. EWICON is a technique that involves transforming wind energy into electricity without the use of mechanical moving parts. The technology creates energy through the displacement of charged particles by the wind in the opposite direction of an electrical field. Tubes run through the center of the 'wheel'. Each tube has several electrodes and nozzles which spray positively-charged water into the air, in a process called “electrospraying.”

The project’s designers also hope to integrate a network of heat pipes linking greenhouses, industrial institutions, and residential homes called a Heat Roundabout. This system of heat pipes will help South Holland reduce the nation's reliance on fossil fuels, and prevent the emission of pollutants into the air. Additionally, the structure will use a closed water system, one capable of capturing rain and recycling all gray and black water.

Construction on the Windwheel is scheduled to begin in 2018, and end sometime between 2020 and 2022. Many of the development's details are still flexible and open to new green technologies. "We don’t know yet which innovations will [definitely] be applied. We want to work with the innovations of the future, not of today,” Lennart Graff, of the Dutch Windwheel Corporation, explained.

Graff says he and his team are still deciding which technologies to incorporate into the Wheel, a process involving discussions with a variety of organizations. Energy companies and tech firms, universities, and developers have all provided input. It’s a task that will take years to finish, especially since some of the concepts are still being researched and fine tuned.

The building‘s projected cost is still unknown, not surprising considering the many upcoming variables. "At the moment we are working on a business plan” which includes the costs structure “with the municipality of Rotterdam, and until [it is finalized] this summer, we are not speculating on the development's overall price,” Graaff said.

If everything goes well, the initial expense won’t matter too much in the long run. "The building's multi-functionality makes a solid business case, ensuring that it will be profitable in 10 to 15 years,” he asserts. This seems a realistic claim, so long as the Windwheel’s engineers manage to achieve the majority of their goals.

The Windwheel will use the innovative Electrostatic Wind Energy Converter (EWICON). It was developed from research done at Delft University. EWICON is based on a 2008 doctoral dissertation that concluded the system was capable of producing energy, but with very low efficiencies, 1.7% at best. While this is far less than the efficiency of a large wind turbine, the advantage of EWICON is there is no moving rotor. This means the building will not vibrate from the moving parts.

Dhiradj Djairam is a member of the TU Delft team that developed the EWICON. He has said the Dutch Windwheel Corporation has expressed "a serious interest" in the technology. Djairam said he has provided an explanation of the technology and provided a rough outline for a research and development program.

The Dutch Windwheel project has other renewable technologies, also. Photovoltaic thermal hybrid panels would contribute to the generation of electricity. The Dutch Windwheel Corporation says the building is designed to be built with local materials, and in a way that would allow it to be disassembled and re-used in another location.

Other features of the design include space for commercial functions on the structure's plinth, and underwater foundations, making it look as though the structure is floating.

The amount of electricity the Dutch Windwheel will be able to generate is not yet clear.

According to the corporation, the project has been in development for almost two years, and talks to bring the concept to fruition are underway. Should it be realized, the company says it expects around 1.5 million visitors per year, and for the project to be profitable within 10 years.