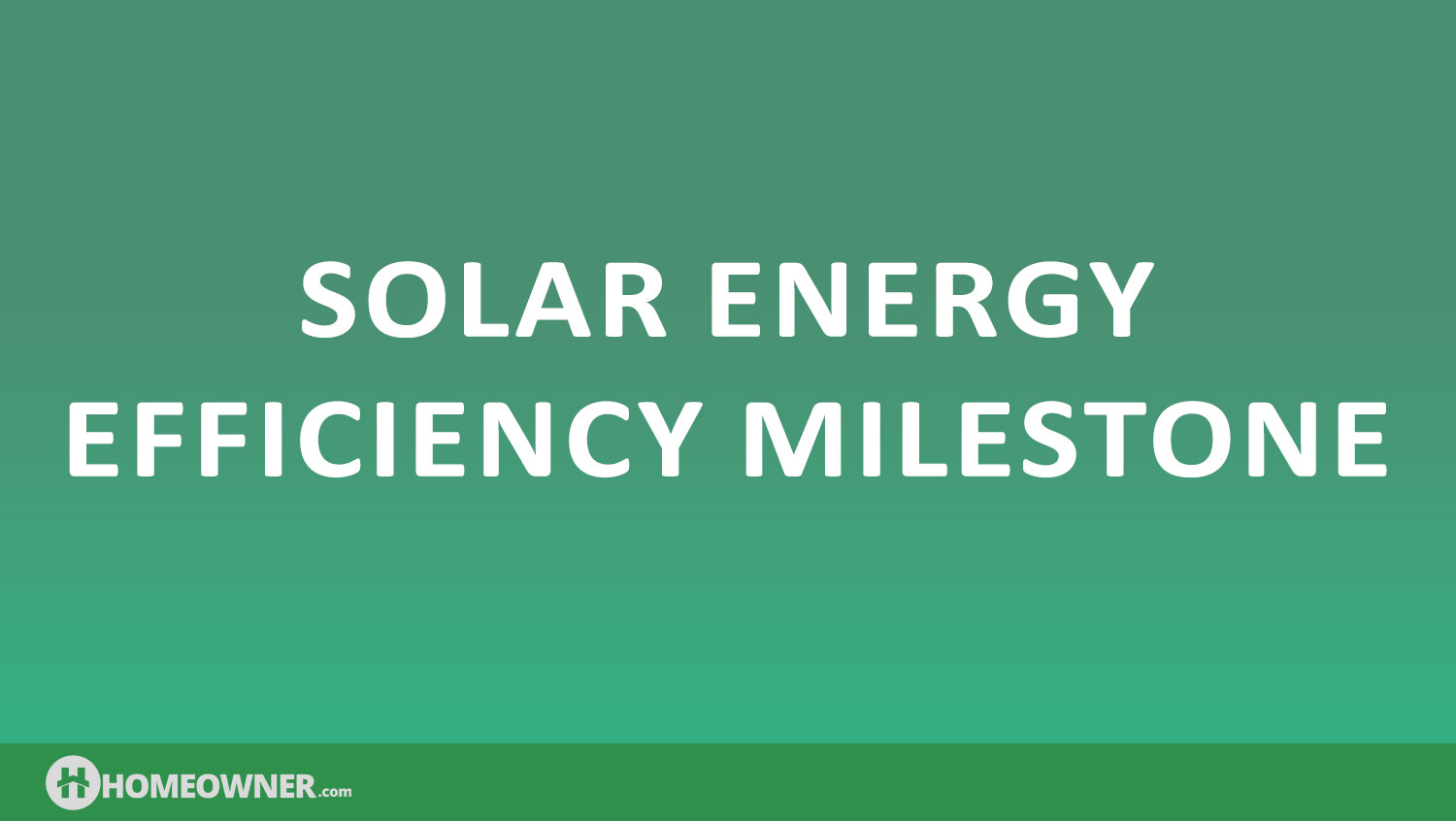 University of New South Wales (UNSW) researchers reached a solar efficiency milestone when they successfully demonstrated a system capable of converting 40% of the sunlight reaching its photovoltaic cells into electricity outdoors with commercial cells. Higher conversion efficiencies have been reported before. However, this marks the first time such efficiencies have been demonstrated in the field.

The solar prototype made headlines across science news and media outlets after its revelation at the Australian PV Institute's Asia-Pacific Solar Research Conference at UNSW Campus on Monday, December 8, 2014.

Funded by the Australian Renewable Energy Agency (ARENA), the UNSW researchers worked with RayGen Resources to create a concentrated solar photovoltaic prototype that uses optical bandpass filters to split sunlight into four different cells. The results were first achieved during outdoor trials in Sydney, before being corroborated by the National Renewable Energy Laboratory (NREL) at an independent testing facility in the United States. This revolutionary development in solar energy comes nearly 25 years after UNSW created the first photovoltaic system capable of reaching 20% solar efficiency in 1989.

The breaking news that flooded headlines in the solar community on December 8, 2014, kicked off the start of one of the biggest weeks in solar energy in the world. The inaugural Asia-Pacific Solar Research Conference was held in association with the 2nd Annual Conference of the Australian Centre for Advanced Photovoltaics (ACAP) at the UNSW Campus in New South Wales, Australia. Investors, researchers, academics, and industry players all gathered in one place for three days to pour over the latest developments in Australian solar research.

Papers up for presentation and peer review covered a wide variety of topics, including photovoltaics, energy policy, low carbon buildings, solar thermal energy, solar heating and cooling, and organic solar cells. To top it all off, the event also featured an opportunity for students to present their work and network with industry professionals. You would be hard pressed to find a better place to reveal a new world record in solar efficiency.

ACAP's research program can be divided into four main components: Silicon Cells, Organic and Earth Abundant Inorganic Thin-Film Cells, Optics, and Manufacturing. ACAP holds the licensing rights for the world's most efficient silicon solar cells, used all around the world and in places as diverse as Germany, Korea, and China. In fact, Suntech, the world's largest solar panel manufacturer was founded by Dr. Shi Zengrong, a former student of ACAP's very own Professor Martin Green.

Meet Dr. Martin Green, the UNSW Professor and Director of ACAP. Green was instrumental in the development of the world's first high efficiency silicon solar cells. An author of six books and countless papers, Green has dabbled in areas as diverse as semiconductors, optoelectronics, and microelectronics, in addition to his expertise in solar energy.

Professor Green holds critical acclaim internationally as the 'Father of Photovoltaics' and his ACAP group already holds the title for most efficient silicon solar cell in the world, one capable of 25% solar energy conversion. With a man like Green at the helm, it is clear that the new energy efficiency record stands on the foundations of decades of solar energy research excellence at ACAP.

How did ACAP breach the 40% Milestone?

The solar prototype consists of two primary technologies, the concentrated photovoltaic power tower and a triple junction cell. In a collaboration with RayGen Resources, UNSW researchers used a concentrated photovoltaic power tower to split and focus sunlight on a triple junction cell converting 40.4% of the photons that hit the cell into electrical energy.

In order to truly appreciate the magnitude of what the ACAP researchers accomplished this year, it is first necessary to understand how photovoltaic cells convert sunlight into electricity.

What is a Photon?

Meet the photon; the quantum of light, the force carrier of electromagnetism, and the light that brightens your day. The photon is a massless, elementary particle that can only be described using quantum mechanics and Einstein's theory of particle-wave duality. In quantum theory, a photon is a bundle of energy called a quantum that is responsible for carrying out one of the fundamental interactions of nature, in this case, electromagnetism. Visible light is just one part of the electromagnetic spectrum, which includes radio waves, X-rays, and Gamma radiation.

In 1839, French physicist Edmund Becquerel noticed that shining light on certain metals could produce a tiny electrical current. In 1905, Albert Einstein expanded upon and tied together the work of Becquerel, Max Planck, and other physicists to provide a more complete explanation of the phenomenon, that light has the characteristics of both waves and particles.

The electrons released when a light shines on a metal are called photoelectrons. The energy of a photon in a beam of light is proportional to the frequency of that beam of light.

Metals have a property called the threshold frequency, below which no photoelectrons will be released. Light must exceed the threshold frequency in order to provide the electrons within the outermost shell of a metal atom enough energy to leave their bounded state. Another way of understanding photon absorption is to look at the band gap. The band gap defines the minimum amount of energy required for an electron to escape its bound state.

A photovoltaic cell converts light into electricity using the photovoltaic effect, a sister process to the photoelectric effect. It turns out that semiconductors are particularly effective photoelectron emitters, albeit via a slightly different mechanism.

When a photon of light hits a semiconductor like silicon, electrons present within its valence band absorb the energy and are elevated to an excited state jumping to the conduction band. Instead of being ejected into a space, as in the photoelectric effect, the electron becomes a charge carrier that jumps into a conductor, completing the circuit and generating an electromotive force.

In this way, a device can be designed where a photon hits a specially treated semiconducting wafer, an electric field is formed, and a current can be drawn directly from the semiconductor, called a photodiode. The elegance of the technology lies in the fact that at its core, there are no moving parts or waste products.

Energy can be converted directly into electricity without any further downstream processing. Photovoltaics have made a number of interesting renewable energy sources possible, all based on harnessing the power of the sun.

How to Harness the Sun

There are many different ways to harness the sun's rays to produce useful work. The traditional conventional method is to use flat silicon solar panels you occasionally see on people's roofs.

The direct beam of sunlight carries roughly 90% of the energy in solar. The remaining 10% of the energy is found in diffuse light which increases in cloudy weather. Since most solar panels are flat, the angle at which sunlight hits the solar panel is very important. An 8° misalignment can correspond to as much as 8.3% loss in energy.

To overcome this dependency many solar panels also employ tracking systems that face the panel directly toward the sun. Large scale solar farms will use similar tracking systems on their mirrors and optics to focus light onto superefficient multijunction photovoltaic cells.

It may seem small, but tracking the sun is part of the reason UNSW was able to achieve record breaking solar efficiency in outdoor conditions. Their solar prototype used one of the highest efficiency technologies available in the world of solar, concentrated photovoltaics.

Concentrated photovoltaics (CPV) is a technology that uses a set of lenses and/or mirrors to concentrate sunlight onto a multijunction cell. Even before UNSW researchers achieved their latest solar efficiency milestone, CPV systems held the highest solar conversion efficiencies among photovoltaic technologies.

The drawback of CPV systems is the inability to collect diffuse sunlight; a single cloud could be enough to halt energy production making them difficult to integrate into a grid.

To partially overcome this deficiency, many CPV systems employ tracking systems that follow the movement of the sun over the course of a day. CPV systems can generate enough energy from peak solar activity during the morning and afternoon to surpass even conventional photovoltaics in areas that receive a lot of sunlight. The large capital cost associated with installing CPV keeps them confined in a niche for large scale solar electricity generation projects.

RayGen Resources happens to be a leader in CPV technology in Australia. They provided engineering support and CPV technology to the ACAP researchers in this latest project. While the paper has yet to be released, it is likely that ACAP used some version of RayGen Resource's existing solar power tower array. In it, an array of sun-tracking low cost mirrors collects and focuses sunlight onto a stack of high efficiency solar cells supported on the top of a tower.

Focusing the sun's rays on a single point generates a lot of heat. The solar power tower also includes a closed loop cooling system to manage the heat.

Most photovoltaic cells are single junction cells, meaning that the photon must have enough energy to equal or surpass the bandgap of the material used in the cell in order to create an electric field. The cell is therefore limited to photons in the sun's spectrum that have more energy than the bandgap of the absorbing material.

The higher energy photons are absorbed at the top while the rest pass through to be absorbed by subsequently lower band gap cells. Junctions between the cells facilitate the movement of photons down the multijunction cell stack.

Spectrolab, a US subsidiary of Boeing, is one of the world's leading suppliers of high efficiency multijunction solar cells. Some of their cells were utilized in the high efficiency prototype's triple junction cell stack.

The ACAP researchers used a cell stack consisting of Gallium Indium Phosphide (GaInP), Gallium Indium Arsenic (GaInAs), and Germanium (Ge) in combination with a commercial silicon CPV cell. They also used an optical band pass filter at the top of the tower to split the sun's rays and optimize how light hits the cell stack. Details of the exact arrangement of the cells have yet to be released, however a paper is currently slated to be published by the Progress in Photovoltaics journal.

The Future of Solar

The future looks promising for the world of solar. Soitec, a CPV company from France, announced a laboratory record 46% solar efficiency in a test lab using a III-V semiconductor material in a four-junction solar cell.

The device was able to generate 50.8 W/cm2 with a solar concentration of 508 suns. The same system tested outdoors only reached 36.7% efficiency, which is noticeably lower than APAC's outdoor achievement. However, the results point towards an upward trend in CPV efficiency that is only sure to grow in the coming years.