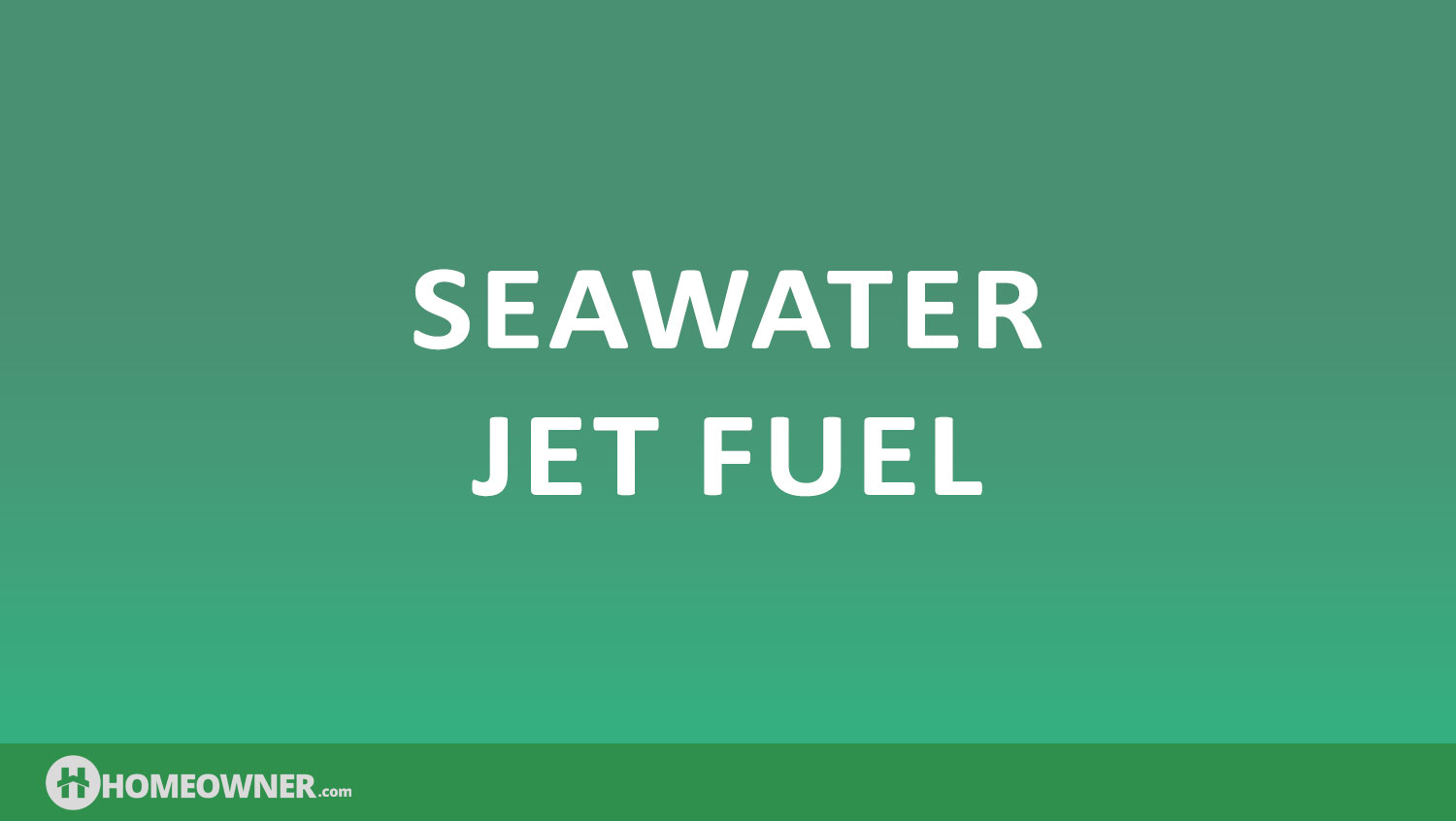 Approximately 71 percent of the Earth's surface is covered in water, and the oceans hold about 96.5 percent of it. As concerns regarding climate change continue to encourage the exploration of alternative energy sources, research institutes, governments, and businesses are starting to look toward water as a potential alternative source of energy.

Usually, this conversation tends to be steered towards more conventional technologies of hydropower, hydroelectric dams, or wave generators. However, the United States Navy has developed a proof-of-concept method for converting the carbon dioxide and hydrogen in ocean water into jet fuel for their fighter planes right on board their aircraft carriers.

The viability of the fuel was demonstrated using a radio-controlled replica of a World War II era P-51 C Mustang powered by an off-the-shelf two-stroke engine. Let's take a look at the science behind the Navy's latest discovery.

Ocean as an Unconventional Source of Carbon

It is estimated that 30-40% of carbon dioxide (CO2) emissions produced by human civilization are absorbed by the Earth's oceans. Ocean acidification can best be described as a physiochemical process driven by the gas concentration differential between the air and the sea. Henry's Law states that when a body of water is in contact with the atmosphere, the amount of gas that dissolves into the body of water is proportional to its partial pressure.

As the concentration of CO2 in the Earth's atmosphere increases due to the burning of fossil fuels and other carbon intensive activities, the system as a whole seeks to reach equilibrium driving the dissociation of CO2 into seawater as carbonic acid (H2CO3) and other byproducts.

The U.S. Naval Research Laboratory (NRL) uses an electrolytic cation exchange module (E-CEM), Carbon Capture Skid to extract CO2 from seawater at 92 % efficiency. The ocean's pH remains fairly constant at approximately 7.8 to 8.1 thanks in part to a complex carbonate buffer system. At these pH levels, roughly 96 % of the carbon in seawater exists as HCO3-.

In order for the E-CEM to operate efficiently, it must first bring the pH of seawater down closer to 4.5 where 99% of the carbon exists as H2CO3 which can readily be degassed into CO2 and H2, which is a necessary feedstock for the production of synthetic fuel.

Bring the pH of Seawater below 6.5

The catholyte used in the cathode chamber is typically deionized or reverse osmosis permeate water that is also free of hardness ions like calcium, iron, or magnesium. The overall reaction replaces sodium ions with hydrogen ions effectively lowering the pH of the seawater. The acidified seawater may then be fed into a vacuum stripper to degas and harvest the CO2 and H2.

Reduction and Hydrogenation of CO2 to form Light Olefins

The next step in the process is to take a feed of CO2 and H2 and contact it with a metal catalyst in a fixed bed reactor to generate light olefins (C2 - C6). The NRL uses a process similar to the standard Fischer-Tropsch hydrogenation of carbon monoxide (CO) into liquid hydrocarbons.

In the gasification step, the feed must be purged of sulfur impurities which can poison the catalysts used in the reactor. The H2/CO ratio in the process is governed by the water gas shift reaction (WGSR), which describes the reversible reaction of CO and H2O to produce CO2 and H2.

Since CO is the species that seeds the production of longer hydrocarbon chains on the catalyst surface, CO2 is considered a waste product formed in the production of hydrogen. This is the key difference between the conventional Fischer-Tropsch process and the 2 step hydrogenation process developed by the NRL for hydrocarbon synthesis.

Since the NRL already has the hydrogen it needs for hydrogenation from processing seawater through the E-CEM, it is not necessary to consume carbon monoxide gas in the WGSR for hydrogen production.

Since the gas stream exiting the E-CEM is composed of H2 and CO2, the NRL wants to catalyze a reverse WGSR, where by carbon dioxide dissociates into the surface of a metal catalyst, hydrogen cleaves the C-O bonds, the hydrocarbon lengthens and CO and H2O are produced as waste products.

This is accomplished by modifying the surfaces of Fischer-Tropsch catalysts like cobalt, iron, and ruthenium by combining them with reverse WGSR catalysts like manganese (Mn) or ceria (CeO2), in a composite silica supported zeolite catalyst optimized for use in a fixed bed reactor.

A fixed bed or packed bed reactor consists of a vessel or set of tubes filled with an inert or catalytic packing material submersed in a hot liquid. The packing material (i.e. Raschig rings or porous zeolite catalyst) is shaped and dimensioned to enhance contact between two different phases within the reactor.

When a gas and a liquid flow through a bed of packing material the two phases are forced into intimate contact with one another due to the dynamic and turbulent conditions within the packed bed. Furthermore, a packed bed enhances heat transfer between the two phases and a catalyst, improving reaction rates and the chemical conversion efficiency of the catalyst.

The NRL uses a proprietary iron catalyst with a modified surface profile to directly process a gas feed consisting of CO2, instead of the typical CO, directly into longer chain unsaturated olefins. The NRL claims to be able to convert 60% of the CO2 in a gas feed into a target olefin and minimize the unwanted production of intermediates like methane from 97 percent to 25 percent. The end result is the synthesis of olefins that can be used as a precursor for ethylene oligomerization into jet fuel.

In order to convert the olefins into jet fuel, the chains need to be lengthened via a process called oligomerization. You might remember from organic chemistry class that a monomer is the smallest molecular unit in a polymer chain. An oligomer is simply what you call a finite set of monomer units. An oligomer two units long is a dimer and an oligomer three units long is a trimer. Oligomerization is simply the process of lengthening an oligomer chain by a finite degree of polymerization to achieve the desired length.

While the oligomerization reaction also takes place within a fixed bed reactor, a different catalyst must be used to lengthen the ethylene chains. First, tetraethylorthosilicate (TEOS) and alumina are subjected to base-catalyzed hydrolysis to form a hydrogel. The hydrogel is spread across a stainless steel sheet before baking in an oven at 110 °C to create amorphous silica alumina (ASA) pellets. The ASA pellets are then reacted with a solution of Ni(NO3)2, water and dried in an oven at 110 °C to create nickel-exchanged amorphous silica alumina (NiASA).

NiASA makes a very versatile catalyst for ethylene oligomerization. By controlling the crystallinity, pore size, and pore distribution it is theoretically possible to tailor the surface for the formation of a particular hydrocarbon. In practice, the degree of control was sufficient to reach the higher octane numbers of jet fuel. The NRL team packed NiASA pellets into a fixed bed reactor at 120 °C to encourage the selective oligomerization of ethylene into C8-C16 fuel fraction which can be burned as jet fuel.

The Mind behind the NRL's Seawater to Jet Fuel Project

Her doctoral thesis, "Fundamentals of phase behavior and solute partitioning in ABS and applications to the paper industry" would establish her as an expert in aqueous biphasic systems (ABS) and phase transitions. Willauer applied her skills at the NRL to research methods for extracting CO2 and H2 from water.

Her research in the early 2000s developed the use of surface modified iron catalysts for breaking down seawater and the porous amorphous silica alumina catalysts required for oligomerization into fuel. The E-CEM and 2 step process for hydrocarbon generation is a culmination of her research team's efforts, and the US Navy intends to deploy some implementation of her novel jet fuel synthesis process on its Nimitz and Gerald R. Ford - Class aircraft carriers by 2020.

Is Converting Seawater to Fuel a Green Technology?

In the wake of the initial press release of the NRL's sea-water to fuel technology, some people were quick to point out that taking carbon dioxide out of the Earth's oceans and burning it in the air is counterproductive to fighting carbon emissions.

Indeed, the ocean serves as a nice buffer to climate change by absorbing CO2 that would otherwise remain in the atmosphere and contribute to the greenhouse effect. However, this type of criticism is naive because it fails to look at the entire carbon footprint of generating jet fuel through conventional carbon channels. Furthermore, the technology is young and has plenty of time to grow in energy efficiency.

The real reason the Navy is interested in the ability for aircraft carriers to produce their own fuel at sea, is that it would represent a major tactical advantage for the U.S. Navy which is tasked with distributing nearly 1.25 billion gallons of fuel a year worldwide. Since the seawater to jet fuel technology is still in its nascent stages, the large energy demands could only be covered in a system where you have plenty of energy to spare like a nuclear reactor on board a large aircraft carrier. This technology can do more than create jet fuel. Depending on the catalyst it should be possible to create a variety of fuels and hydrocarbon products from seawater, like methane or pipeline quality natural gas.

The Navy eventually wants to greatly reduce the number of oilers in their supply line. The necessity of a destroyer or carrier to rendezvous with an oiler in the middle of a mission can be costly and a potential vulnerability for foreign attack. Independence from fossil fuels brings with it an added level of security, further insulating the Navy's energy needs from turmoil in the Middle East.