The Race for New Energy 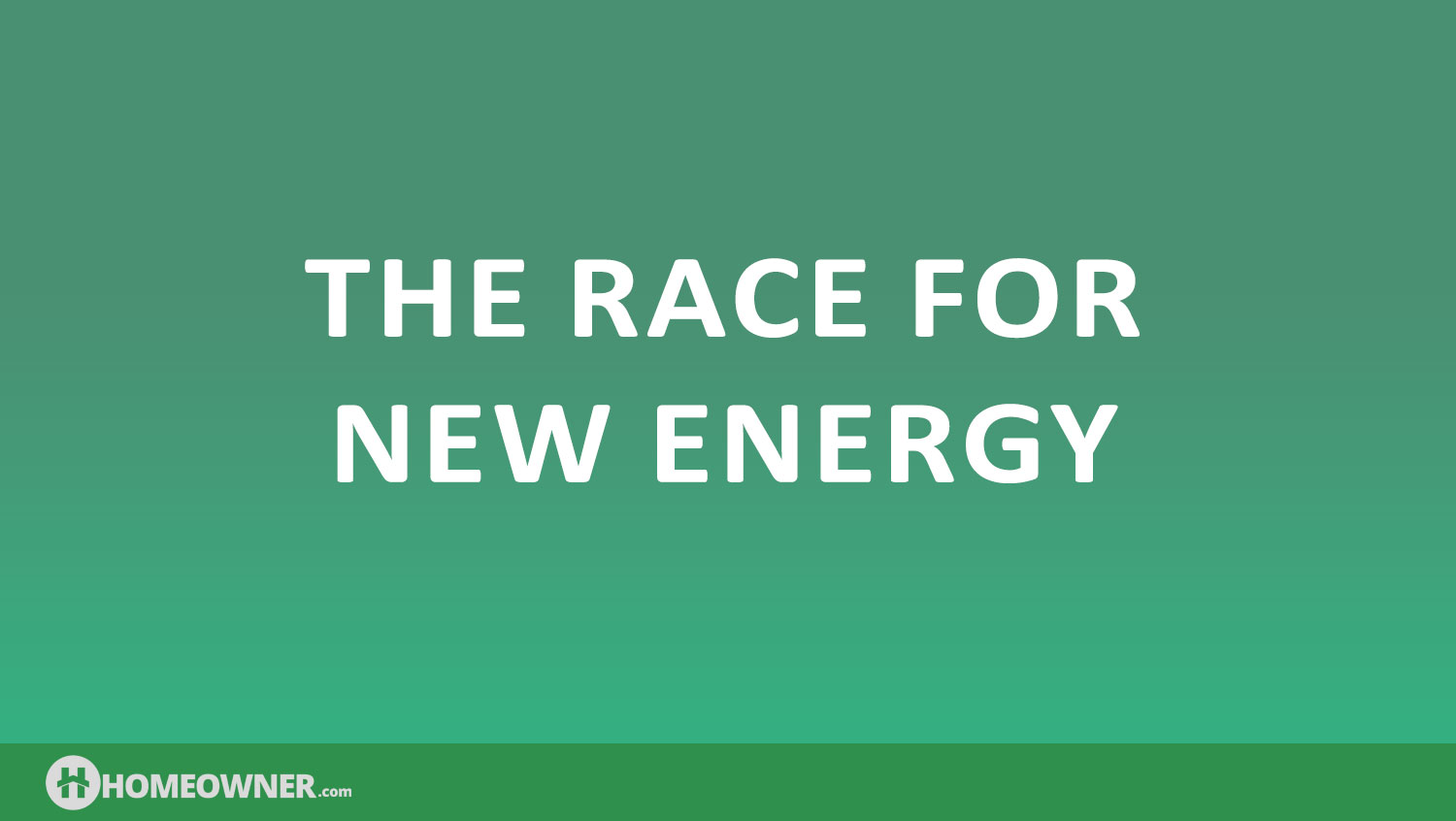 There are a number of researchers working to uncover and develop new energy sources from cold fusion technology to extracting zero point energy.

These pioneers are striving to discover a way to tap the abundant energies of the atom or the space around us.

Unfortunately, the efforts lack both governmental and traditional science support. The revolutionary and world-changing discoveries of the past also suffered from this lack of support. Even without large funding resources, these researchers have built a fascinating body of work that will intrigue you. If even one of these researchers achieves his goal, your world will never be the same.

The following information about the search for new energy is excerpted from:

Chapter 16 – The Race for New Energy of AEI's award-winning book, Turning the Corner: Energy Solutions for the 21st Century.

Scientists, engineers, and professional researchers are excited about a plethora of new emerging energy systems that, with sufficient financial and government support, might be developed and brought to market in time to help society make the transition from limited and polluting fossil-fuel-dependent energy systems to a future of clean, decentralized power generation.

Forward-looking scientists and engineers see a bright future of high-power energy packages, such as advanced batteries, inexpensive fuel cells, microgenerators of cheap electricity as well as decentralized power sources that will be affordable and environmentally clean. Modular, on-site heat and electricity generators will replace our current centralized utility-based energy system.

This will be especially important in developing nations that cannot afford the extensive infrastructure of high voltage wires needed to distribute electricity. In fact, there are many new technologies in the theoretical or research and development stages that have the potential to convert energy into useful work.

Funding has always been a serious problem for the men and women exploring the frontiers of science. Pioneers in the emerging new energy field are self-motivated and usually nonconforming; they prefer to learn and discover new things for themselves as opposed to being taught from a textbook. When it comes to scientific investigation into truly new energy frontiers, guidance from past records is often of little help and may hinder efficient progress. Inventors, who work solo or in small teams, must choose a project or route of exploration that they can complete by themselves. Isolation often results as researchers seek to protect the proprietary information that gives their work commercial value and secures the inventor's share of future profits.

Research into breakthrough energy systems is challenging, expensive, and time consuming. Since most of the new technologies will not prove successful in commercial applications, often frustrating. A major problem in the alternative energy field is that most conventional physicists and academics believe this kind of research violates the laws of physics and, therefore, is a waste of time.

Many individuals working on their own feel that they are a victim of a "conspiracy of suppression" when, in fact, they are only battling the inertia of the established scientific paradigm. Some men and women working at the periphery of known science have not helped their cause by making outlandish promises and overstated claims of experimental success.

Included as two objectives are:

1) "Maintain a strong national knowledge base as the foundation for informed energy decisions, new energy systems, and enabling technologies for the future;

2) Expand long-term energy options." An independent study was performed by

Alternative Energy Institute, Inc., on the DOE's progress under the CNES declaration, and it is clear that the DOE has not yet engaged in developing, much less maintaining, a robust knowledge base of future energy choices.

There has been no expanded research into new energy systems or long-term energy options, mainly due to upper management decisions.

Instead of investigating potential clean carbonless energy technologies, the DOE has endorsed natural gas use for future generations (it burns cleaner than coal or oil but is also a limited, nonrenewable resource), and supports using coal and nuclear energy to provide much of the nation's electricity.

Optimists claim that there is enough oil worldwide to last another 40 years. Some experts consider it to be much less. What then? Now is the time to make the decisions that will facilitate the transition from the pollution-ridden fossil fuel age to a future of clean and virtually limitless energy technologies.

At this time, there is no new technology or renewable resource that can single-handedly replace oil as the energy product of choice. It will take a combination of well-designed, reliable, environmentally friendly, renewable, and new energy systems to take the place of cheap petroleum.

It is time to wholeheartedly support and implement renewable energies like wind, biomass gasification, and solar power, as well as the search for future power systems that will tap the sea of energy that surrounds us all.

The 19th century philosopher Henry David Thoreau got it right when he said, "If you have built castles in the air, your work need not be lost; that is where they should be. Now put foundations under them."

The University of Wisconsin/Fusion Technology Institute has taken a leading role in developing IEC fusion. Unlike earlier, unsuccessful attempts to imitate the Standard Model of a star, IEC fusion uses spherical electrostatic containment fields to accelerate deuterium and helium-3 ions toward the center of the sphere, where they collide.

Injected electrons create a cloud throughout the inside of the sphere, causing a well of negative electrostatic potential. Deuterons, near the outer grid, will accelerate towards the inner grid and pass through the electrostatic center of the system, with momentum moving them to the opposite wall area, where they then turn and re-circulate continuously.

These ions fall down what is called “potential” hill, gaining speed, colliding, and converging on the center of the sphere, creating a small, spherical core of high density. During these collisions, small scale fusion takes place. For a sufficiently deep “potential” well, steady fusion power can be generated from this core. Early investigations of the IEC concept have concluded it can be a viable fusion reactor, though a number of questions remain.

Fusion was initiated using two separate experimental procedures. In the first, deuterium atoms were fused together resulting in helium-3 atoms and extra neutrons, or tritium and extra protons. In the second procedure, helium-3 and deuterium were mixed in equal parts with the fusion process producing helium-4 (normal helium). As with the first experiment, deuterium atoms also fused with one another, producing helium-3 and tritium. 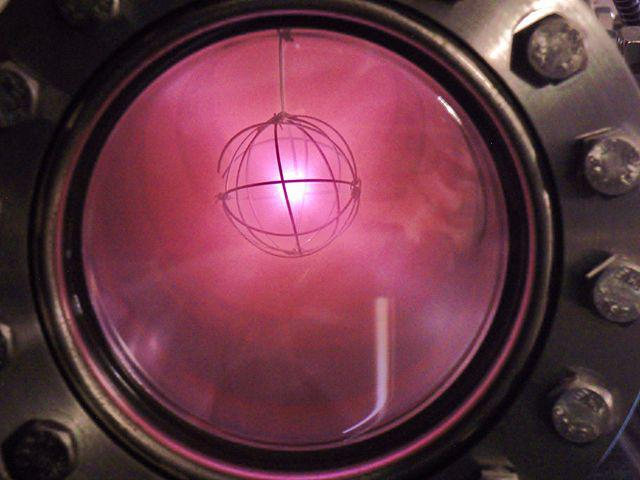 Inertial Electrostatic Confinement is a branch of fusion research focused on using an electric field to heat plasma to fusion conditions. This fusion process can be done in a cylinder or using beam geometry, but the preferred method is with the use of a sphere.

An electric field can be generated using a wire grid in the shape of a sphere.

In the 1960s, Philo Farnsworth, while working with vacuum tubes, observed an electric charge would build up inside the tube. This came to be called the Multipactor effect. Farnsworth reasoned if the ion count was concentrated enough, the ions could collide and fuse. In 1962, he filed a patent for a design using a positive inner cage. His device came to be called a fusor.

In 1980, Robert W. Bussard came up with the idea of merging the fusor and a magnetic mirror, and it became called the polywell. The concept was to confine a non-neutral plasma using magnetic fields, which would also attract ions.

In the early 1990s, Nicholas Krall joined Bussard in his research, and they published their work and experimental results. In 1995, Todd Rider, of MIT, read the report and argued the device was fundamentally limited. The same year, William Nevins published a criticism of the polywell, arguing the particles would build up angular momentum and cause the core to disintegrate. Around the same time, the University of Wisconsin- Madison became involved in researching IEC fusion.

Despite a successful device demonstration showing 7200 hours of operation, the FusionStar project, as it had come to be known at the University of Wisconsin, was canceled. Immediately, the company NSD Ltd was founded and took over research on the project.

The spherical FusionStar concept was further developed using a linear geometry system and a higher neutron output. NSD ltd then became NSD-Fusion Gmbh. In 2013, NSD was purchased by Gradel, and the company name became NSD-Gradel-Fusion, which began selling IEC fusion units as “neutron generators,” a technology developed during their research.

The IEC system has undergone steady and continuous refinement, and currently produces over 600,000 neutrons per second. It has been determined that both light neutron and x-ray shielding will be needed in developing the Fusor 5.

Inertial Electrostatic Confinement has, at present, evolved into a way of generating neutrons for other experimental purposes. One approach to this newfound goal is called the Periodic Alternating Plasma Sphere (POPS) which phase locks ions as they oscillate. The result is a concentration of heat at the center of the sphere, rather than a more widely spread area of heat.

Another approach that has the same effect is through the use of multi-grid confinement (multiple caged spheres, with each contained sphere getting smaller. In this system, ion focusing is more intense, providing longer confinement times for the ions. This system is described as having the same result as the POPS system.

While IEC has evolved into a neutron production device, the heat at the center of an IEC sphere is consistently the primary goal. Though the IEC sphere has lost its way as an alternative energy source, research continues. The emphasis on the heat at the center of the sphere may yet turn this technology into an alternative energy source.

The most common arguments against investigation of these new energy forms center around one of two important principles of physics. The first is conservation of energy in closed systems and the second is the current model of the nuclei of atoms, in particular hydrogen.

The response to these criticisms from researchers in the field has been two-fold as well. The definition of a closed system is open to discussion. Most researchers into new forms of electricity production do not argue the concept of energy conservation. Instead, they point out that it is possible to define the system such that vacuum (or zero-point) energy is included and the apparent problems disappear.

For permanent magnet motors, it is thought that the magnetic energy is converted directly. Second, it is pointed out that current models of nuclear fusion are incomplete and cannot produce the observed deficit of solar neutrinos. This leaves the models open to significant interpretation.

A plethora of potential alternative energy technologies seem just out of reach these days. The theories behind some of these "new" forms of energy production have been around for a long time and have historically met considerable opposition from traditional science and engineering. They still do today.