Guide To Off Grid Energy Solutions 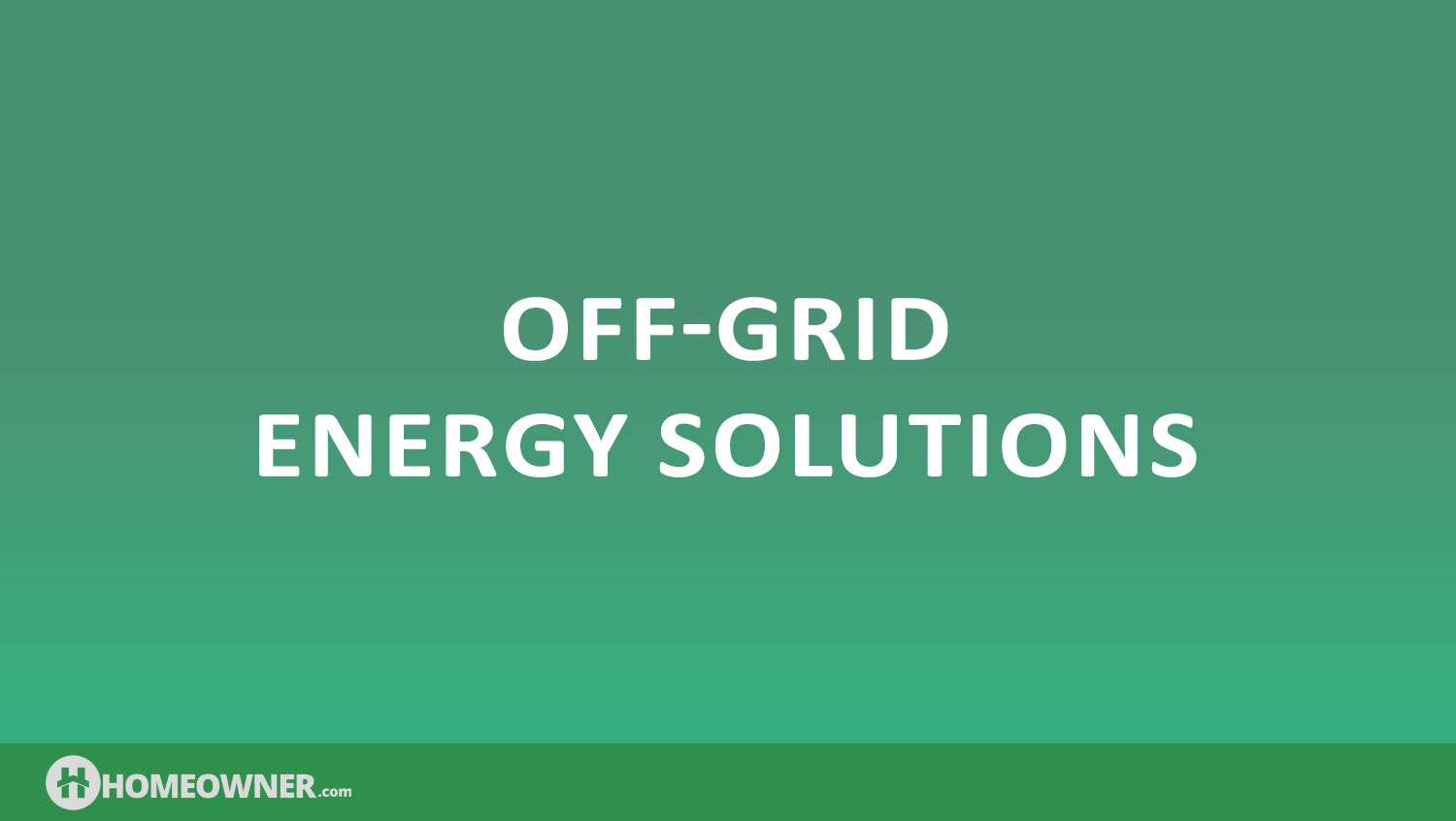 Energy is the product of power and time, measured in Watt-hours (Wh). Energy is generated by the sun, and is stored in a variety of forms. It is locked into biomass through the process of photosynthesis. Burning biomass releases energy, as does decomposing biomass (e.g., digesting it through anaerobic processes as in biogas).

Energy is stored in the oceans where the movement of the earth and gravity release it through tides, where the earth’s movement and gravitational pull of the moon and sun generate tides, temperature variations, and the earth’s spin generate waves and wind.

Power is the flow of energy at any one time and is measured in Watts. Useful power is generated from renewable energy resources through solar conversion (photovoltaics, solar thermal electricity, solar heating), through harnessing water (hydropower for electricity, wave and tidal generation through turbines), through harnessing the wind (wind pumps for water, wind turbines for electricity), and a variety of other energy sources.

If an appliance operates at a different voltage than the battery (i.e. if a radio draws 6 volts dc when the storage battery is at 12 volts dc), then a voltage converter is required to step the current down to the proper voltage. This will avoid damage to the radio (or other appliance). Voltage converters are often available in electric appliance stores.

Especially with large systems, it may be necessary to run appliances that require 240 VAC (i.e. color televisions, refrigerators, or videos). Inverters convert dc power into a form suitable for high voltage AC loads. Changing dc power into AC power is also called inverting dc to AC, which is why low voltage lamp ballasts are called inverters. Unlike ballast inverters in lamps (which change up to 50 watts of dc power to AC), invert hundreds or thousands of watts from dc to AC.

During the process of converting dc to AC, inverters use energy. They are typically about 85% (or less) efficient in converting power. When planning large systems the energy loss in conversion must be included in calculations.

If power conditioning units are used in a system, they must be properly sized to handle the highest current possible, or the peak energy demand i.e. when all the appliances are turned ON).

What are Generating Sets (Gensets)?

Generating sets supply more off-grid electricity than all other sources of off-grid generation combined. Generating sets (commonly referred to as "gensets" and in North America as "gennys") are usually powered by either diesel fuel or petrol/gasoline. They are usually rated in either kVA (kilovolt ampere) or horsepower (HP), although some people refer to the power rating in kilowatts (kW).

Gensets range in power from the smallest, a couple of hundred Watts, to very large, e.g. 10 MW. What characterizes a generating set in common usage is that a genset is portable. That is, it can be moved from one place to another. While the concept of moving a 10 MW genset stretches the definition of "portability," gensets usually can be moved, and are generally not built permanently into a structure such as a power house or station.

The smallest systems are simple machines that are air-cooled, and should not be run as base load (i.e., to generate electricity around-the-clock). The smallest units are petrol/gasoline-driven and operate at high RPMs (rotations per minute). They get hot very quickly, and, if operated frequently, or as base load, their lifetimes are very limited (perhaps in terms of months).

Diesel generators are generally more robust pieces of equipment. Diesel gensets have been built and operated all over the world for most of the 20th Century. They can be found virtually anywhere in the world. Some of the world's best-known diesel genset manufacturers (or companies that now own them) have supplier networks all over the world.

Diesel gensets provide the advantages of ease of operation, ease of repair, generally plentiful spare parts, and an army of technicians and mechanics who can operate them and repair them. This explains, in very large part, why gensets are so popular. They are also almost always "off-the-shelf" (i.e., can be purchased without special ordering), and can be shipped anywhere in the world.

Industry analysts estimate that, in Africa alone, over 100 MW of gensets are purchased each year, while in Asia, the figure is closer to 300 MW. They are doubtless one of the world's preferred off-grid electricity solutions, and they are more often than not integrated as backup electricity supplies for larger PV and wind electric systems.

Energy is referred to as the ability to do work. Energy is measured in units called joules, J, or in watt hours as shown below. One kilojoule, kJ is equal to a thousand joules, and one megajoule, MJ, is equal to a million joules.

Watt hours (Wh) are a convenient way of measuring electrical energy. One watt hour is equal to a constant one watt supply of power supplied over one hour (3600 seconds). If a bulb is rated at 40 watts, in one hour it will use 40 Wh, and in 8 hours it will use 320 Wh of energy. Electric power companies measure the amount of energy supplied to customers in kilowatt hours, Wh (or thousands of watt-hours, kWh). Note that one kilowatt hour (1kWh) is equal to 3.6 megajoules.

Power is the rate at which energy is supplied (or energy per unit time). Power is measured in watts. One watt is equal to one joule supplied per second.

Alternating current (AC): Electric current in which the direction of flow changes at frequent, regular intervals.

daily energy requirement: the amount of energy that a household, an institution, or any establishment requires to meet the sum total of its energy needs.

Charge controller: A device that protects the battery, load, and array from voltage fluctuations, alerts the users to system problems, and performs other management functions.

Circuit: A system of conductors (i.e. wires and appliances) capable of providing a closed path for electric current.

Converter: An electronic device for DC power that steps up voltage and steps down current proportionally (or vice-versa). Electrical analogy applied to AC: See transformer.

DC (Direct Current): DC is the type of power produced by photovoltaic panels and by storage batteries. The current flows in one direction and polarity is fixed, defined as positive (+) and negative (-). Nominal system voltage may be anywhere from 12 to 180V. See voltage, nominal.

Direct radiation: Radiation coming in a beam from the sun which can be focused

efficiency: Efficiency is the percentage of power that gets converted to useful work. Example: An electric pump that is 60% efficient converts 60% of the input energy into work pumping water. The remaining 40% becomes waste heat.

Efficiency: Efficiency is the percentage of power that gets converted to useful work. Example: An electric pump that is 60% efficient converts 60% of the input energy into work pumping water. The remaining 40% becomes waste heat.

Electricity: Energy that is generated by a number of methods, ranging from mechanical (e.g., windmill), to thermal (e.g., diesel generator), to photovoltaic, and used to provide power for many applications.

Energy calculations: Any set of calculations typically used to determine the amount of demand or load that one has (e.g., the number and voltage required for appliances, equipment, etc.), and then defining the electricity that needs to be supplied to meet that demand/load, taking into consideration all losses in the system.

Hydropower: Power generated by the flow of water. Water that moves by force of gravity, either vertically (as in streams and rivers) or otherwise (as in tides and waves driven by the gravitational force between the earth and move, by the wind, etc.). Water power

Insolation: Incident solar radiation. A measure of the solar energy incident in a given area over a specific period of time. Usually expressed in kilowatt-hours per square meter per day or indicated in peak sun hours

Inverter: An electronic device that converts low voltage DC to high voltage AC power. In solar-electric systems, an inverter may take the 12, 24, or 48 volts DC and convert it to 115 or 230 volts AC, conventional household power.

Kilocalorie (kcal): A measure of energy equivalent to 4.187 kJ/kilojoules, or 1.63 Wh/Watt hours

Load: The amount of demand placed on an energy system. In the case of most electricity, load could be the set of equipment appliances that use the electrical power from the generating source, battery, or module, and the amount of electricity (the load) that those appliances require. Load is often used synonymously with "demand". Load is usually expressed in "watts", so that, for example, if a refrigerator has a rating of 1 kW, the load is cited as being a 1 kW load.

Power: The rate at which work is done. It is the product of Voltage times Current, measured in Watts. 1000 Watts = 1 kilowatt. An electric motor requires approximately 1 Kilowatt per Horsepower (after typical efficiency losses). 1 Kilowatt for 1 Hour = 1 kilowatt-hour (kWh).

RE: Renewable energy. Energy from sources such as the sun, wind, water, waves, tides, biomass, that are renewable, that is, that can be renewed within a relatively short period of time.

Solar energy: Energy that is received from the sun.

Transformer: An electrical device that steps up voltage and steps down current proportionally (or vice-versa). Transformers work with AC only. For DC, see converter.

Wind power: Power generated by the movement of the earth's rotation, and the temperature variations around the globe. Wind has been harnessed for power for thousands of years (e.g., sailing boats) and for mechanical power for a thousand years (windmills).