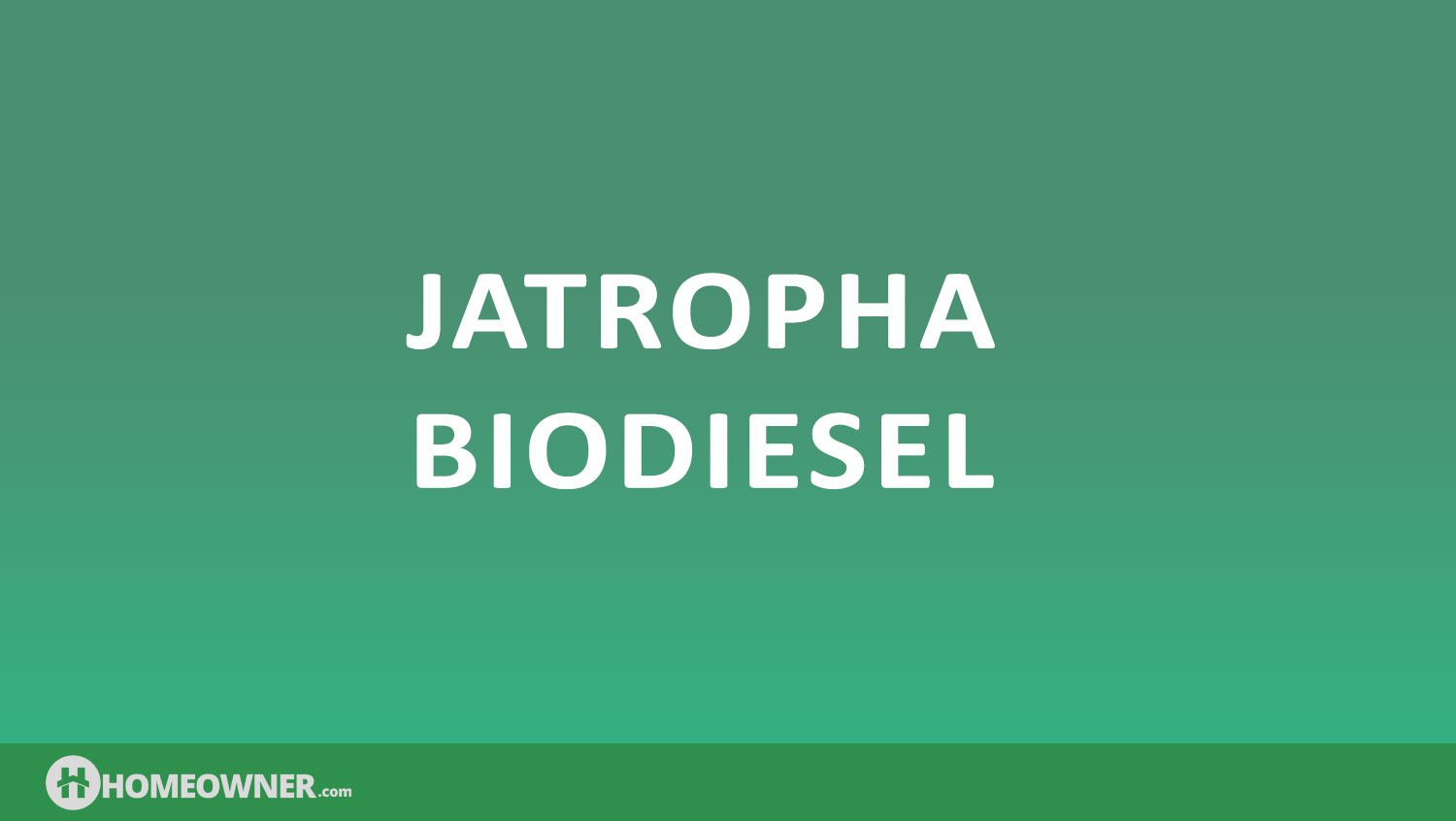 The world today currently generates most of its energy from the remains of long-dead organisms that have been compressed and heated for millions of years under the Earth's surface. The amount of oil present in the world is finite, and you would have to wait millions of years for today's organisms to replenish the planet's natural oil reserves.

But what if you didn't have to wait millions of years to create new hydrocarbons, what if you could harvest them as a renewable resource like wine from a vineyard? In the quest for sustainable energy, many governments, businesses, and research institutions have looked toward biofuels as a potential source of renewable energy.

Jatropha curcas is a small oleaginous fruit-bearing tree from the Euphorbiaceae family that thrives in warm weather and can grow in barren soil. The oil found in its seeds can be converted into a high quality diesel fuel. Since Jatropha is inedible, it does not compete with food crops. Furthermore its ability to withstand periods of drought, naturally repel pests, and grow in subprime soil makes it a great candidate for combating soil erosion and providing energy independence to several third world countries.

A Central American native, Jatropha has since spread to most regions of the tropical and subtropical belts, and the plant can be found in a wide range of elevations from sea level to as high as 1800 m. Jatropha boasts a large rainfall tolerance, surviving in conditions between 250 and 3000 mm of rainfall per year. Jatropha does have its limitations, being susceptible to frost damage. This restricts Jatropha to what industry experts call the Jatropha Belt, a region spanning 30 N latitude to 35 S latitude.

The crude oil harvested from Jatropha seeds needs to be processed into a diesel before it can even begin to compete with other energy sources. Jatropha biodiesel is the processed form of Jatropha oil and gets its power from the energy-rich bonds found in fatty acid methyl esters (FAME). Here is how manufacturers take oil from a tropical succulent to a high grade biodiesel.

While Jatropha can survive in arid conditions, optimal oil yields are still achieved the old-fashioned way with optimal soil yields and a steady supply of water. The resilience of the crop should be treated as a nice countermeasure to fall back on in times of drought. Yields will be lower, but the impact of the drought will not be as bad for a Jatropha farmer as someone farming a conventional crop. Jatropha thrives in hot weather with medium to low rainfall; meaning the water requirements for a healthy yield are lower than comparable crops.

Jatropha is a perennial crop and a single tree can continue to produce fruit for up to 50 years. While a Jatropha tree can be grown from cuttings, this leads to the development of an inferior taproot system and overall lower oil yields over the lifetime of the tree.

For biodiesel production, trees should be germinated from seeds planted at the start of the rainy season. 96% germination can be achieved by soaking seeds in cow manure slurry for 12 hours before transferring them to nutrient rich soil for three months prior to the start of the rainy season. Once cultivated, the saplings can be moved to the fields just in time for the rain.

Tree spacing is critical in optimizing a plantation's seed yield per hectare. Seed yield per tree increases the more space is allocated to a tree. However, if you give the trees too much room, seed yield per hectare will obviously decrease. Plant spacing dimensions of 2 x 2 m2 to 3 x 3 m2 are considered standard practice. As with all crops, optimized yields have to be based on breed, soil quality, and other environmental factors.

After harvesting the fruits and removing the seeds, it is necessary to extract the oil for use as feedstock in biodiesel production. The average Jatropha seed is approximately 30-40 weight % oil. The seeds need to be dried in an oven at 105 C or dried under the sun for three weeks.

Oil extraction can be accomplished mechanically or chemically.

The traditional mechanical approach involves pressing the oil out of the seeds in a screw press. Seeds are fed into a hopper and subjected to intense frictional and shear forces by a rotating screw. Engine driven presses can extract anywhere from 75 - 80% on a single pass and as high as 89-91% if precooked and subjected to two passes.

The chemical approach uses a solvent to chemically leech the oil from ground seed kernels. The ideal solvent will have high oil solubility and a low boiling point. Upon multiple passes of a chemical solvent in a commercial distillation tower, it is possible to boil off the solvent and concentrate nearly all of the oil present in the ground kernels in the bottoms product of the tower. This method is only feasible for large scale production schemes due to the cost of maintaining and running a distillation tower.

Regardless of which process is used for oil extraction, a significant amount of seed cake is left behind. While most biomass waste cakes can be used as feedstock for farm animals, the same phorbol esters present within the Jatropha plant that makes the crop resistant to pests also make it mildly toxic to mammals.

Fortunately, the seed cake is 100% biodegradable and shares many of the desirable elements found in commercial fertilizers, making it an excellent source of nutrients for the Jatropha trees back at the plantation. The nutritional value of Jatropha seed cake is comparable to chicken manure.

Once the oil has been extracted, it's time to transform it into biodiesel. In order to convert the triglycerides in Jatropha oil into biodiesel FAMEs, they must undergo a transesterification reaction to alcohol with an acid or base catalyst. Transesterification is the process of swapping the organic groups of an ester with the organic group on an alcohol.

A triglyceride consists of an ester with three fatty acid chains. Swapping the hydrocarbon chains of a triglyceride with methanol or ethanol produces the desirable FAME. The reaction may be catalyzed by a strong acid or base. In the case of an acid, a proton is donated to the carbonyl group on the ester to create a carbocation. Alcohol makes a nucleophilic attack on the carbocation producing FAME, a hydronium ion, and glycerol as a byproduct.

In the case of a base, the reverse occurs with the strong base removing a hydrogen atom from the alcohol to create a strong nucleophile. The resulting alkoxide makes a similar nucleophilic attack on the carbonyl group to yield a FAME, alkoxide ion, and glycerol. It should be noted that it takes significantly less steps for the reaction to take place under basic conditions, leading to faster reaction times. This makes base catalyzed reactions the preferred method in the industry.

The standard method for applying the transesterification reaction on the production level is to use a batch process where the chosen catalyst is dissolved in alcohol and mixed with crude Jatropha oil in a sealed reactor vessel. The temperature is maintained just below the boiling point of the alcohol allowing the reaction to take place around 60-70 C.

At the end of the reaction, liquid visibly separates into two phases, glycerin and biodiesel, due to the differences in density. Excess alcohol is flashed off of the liquid and recovered while the glycerin is removed using gravity separation techniques. The basic catalyst and any soap or other byproducts must be removed from the biodiesel in further downstream processing.

The transesterification reaction can proceed without a catalyst if the alcohol and ester are reacted at their supercritical temperatures and pressures. At extremely high temperatures and pressure, methanol and the Jatropha trimethyl esters can exist as a single homogeneous phase, greatly enhancing the reaction rate and allowing biodiesel production in the absence of a catalyst.

The reactions in a supercritical reactor typically take place at temperatures and pressures in excess of 600 K and 20 MPa. Since the critical temperature and pressure of water are approximately 647 K and 22 MPa, care must be taken to ensure that the feedstock is completely void of water before using the reactor less the water rapidly expand and cause an explosion.

While we have already covered its ability to survive in harsh conditions, Jatropha comes with a number of advantages over fossil fuels and comparable biodiesel crops. Tests conducted by the EPA have shown that the hydrocarbon emissions of Jatropha biodiesel are roughly half that of fossil diesel, leading to a reduced carbon footprint. The crops can also be used to increase the value of spent land that won't compete with food crops.

Jatropha can have a positive impact on many third-world countries in the tropical belt, as farmers can potentially turn undervalued deforested land into a new sustainable livelihood.

Is Jatropha too Good to be True?

Jatropha's inherent advantages over competing biofuels made it immensely attractive to investors and governments alike. As a result, millions of investment dollars were poured into Jatropha plantations from India to Mexico.

Abysmal returns on oil yields left a sour after taste in the mouths of investors in the early 2000s. Poor yields in the field also hurt many rural communities in India who sold their land due to false promises of riches. Many people attempted to cultivate Jatropha in Madagascar, Kenya, Tanzania, and India but saw little if any success.

As it turns out, while naturally growing Jatropha crops could be grown in barren lands, a significant amount of water, rich soil, and good agricultural management are required to reach the yields toted by Jatropha biodiesel enthusiasts. By 2012 media outlets began to report that the dream of a Jatropha economy was dead.

Fortunately, advancements in breeding and genetics have paved the way for the next round of Jatropha development. In the fall of 2014, it was revealed that SGB received $11 million in financing to pursue their revolutionary high oil yield hybrid Jatropha plants.

While other investors invested in farms and biodiesel plants, SGB invested in the crop itself. They recognized that the foundation for any agricultural business is in the biodiversity of the crop, and that the centuries of agricultural engineering that has brought crops like corn where they are today has yet to be performed on Jatropha.

To unlock the full potential of Jatropha Curcas, SGB poured $40 million in investment money over a period of 7 years since 2007 into genomics and cultivating the genetic diversity of Jatropha to create a hybrid crop optimized for human needs. SGB gathered over 12,000 genotypes of Jatropha, from which desirable traits like larger fruit, increased seed size, and higher oil yields were cultivated.

Most conventional farms by comparison only had access to 1-3 common genotypes in their areas to leverage for breeding purposes. The result is a suite of hybrids that can be optimized on a location basis, breeding the best possible Jatropha plant for a given farmer's needs.

Furthermore, high yield oil could be achieved in plants on subprime soil, counteracting some of the naysayers in the aftermath of the initial round of Jatropha investment.

The hybrids can produce 30% more protein than soy, opening the potential for processing waste seed cake as a possible feedstock or protein replacement. The year 2014 is looking bright with genomics leading Jatropha into the future.