Compressed Air as a Form of Energy 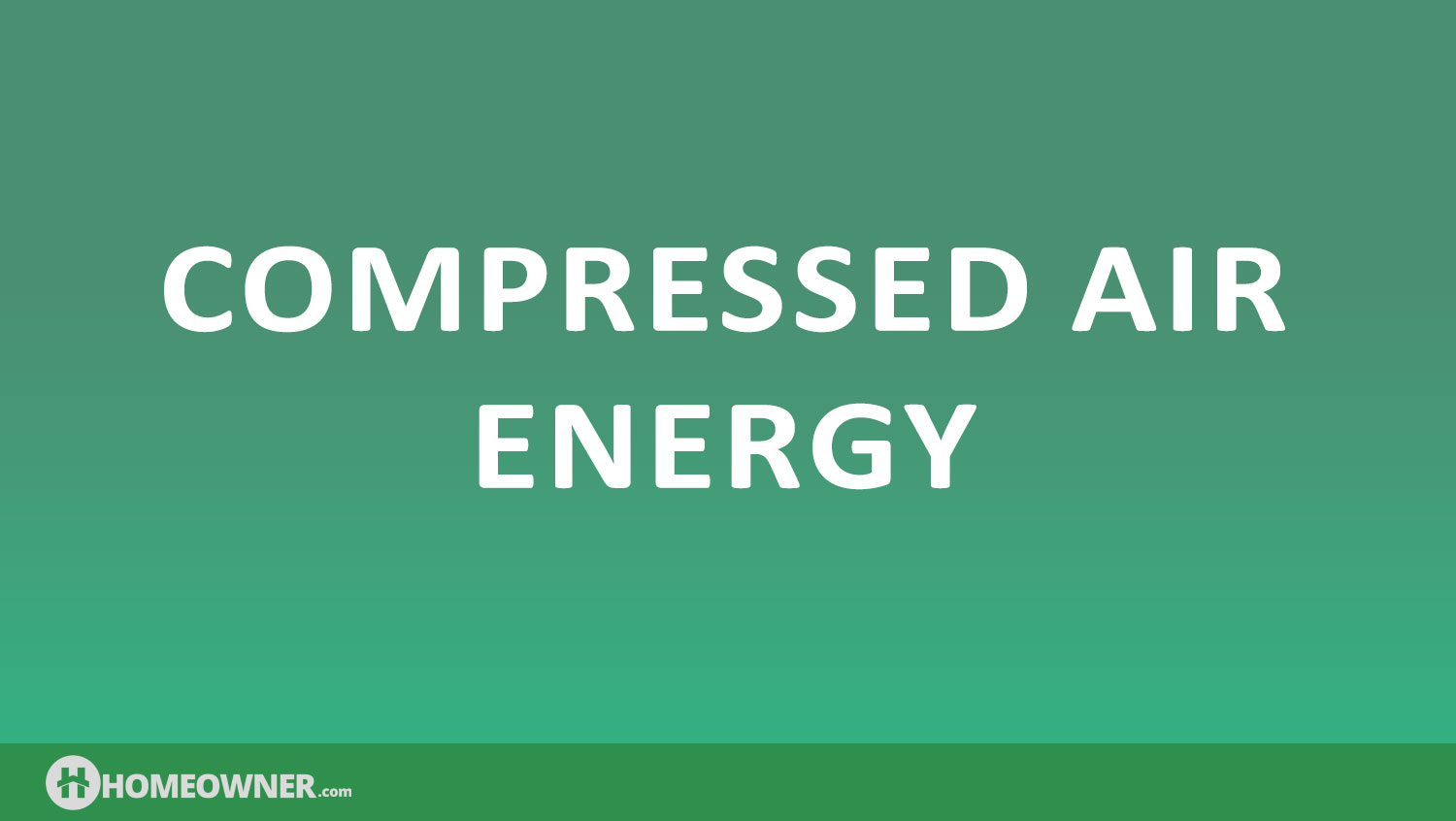 Small storage systems have been used for some time as the propulsion for mining trains. Large scale applications focus on conserving the heat energy involved in compressing air (heat loss reduces the amount of energy being stored).

Compressed air energy has been used to power cities since 1870. Cities such as Paris, France, and Buenos Aires, Argentina have used compressed air systems. The first use of compressed air as an energy source was constructed by Victor Popp. He used it to power clocks. He sent a pulse of air every moment to change the clock's pointer arms. Compressed air quickly evolved into a source of power.

Compressed air is still used as a source of energy for a number of industrial and construction jobs. The systems provided energy to the machines of seamstresses, dentists, printers, and bakeries. It is quite popular with roofers using compressed air nailing guns

Large amounts of compressed air are often stored in underground caverns. This type of system has a large storage capacity. The cavern can be insulated and compressed with little temperature change and heat loss. The low cost of construction for these compressed gas storage systems is an advantage, using the cave walls to help contain the pressure.

If ambient air is very slowly compressed into a five-liter bottle at 20 MPa (200 bar), the potential energy stored is 530 kJ. A highly efficient air motor can transfer this into kinetic energy if it runs very slowly and manages to expand the air from its initial 20 MPa pressure down to 100 kPa (the bottle is completely "empty" at ambient pressure). Achieving high efficiency is a technical challenge both due to heat loss and unrecoverable internal gas heat. If the bottle is emptied to 1 MPa, the extractable energy is about 300 kJ at the motor shaft.

Fiber-reinforced bottles can be compared to rechargeable lead-acid batteries. Batteries produce a nearly constant voltage during their entire discharge. The pressure in a container continuously lowers from full to empty. It is a technical challenge to design compression tanks able to maintain both high efficiency and consistent power from a broad range of internal pressures. Compressed air can also be used to transfer power at high flux rates, which is useful for the acceleration and deceleration of transportation vehicles. Hybrid vehicles using compressed air are now being investigated.

Compressed air tanks have some advantages over traditional batteries. This includes longer lifespans and a lack of poisonous acids. New battery designs, like those using Lithium Iron Phosphate don't have these problems but can overheat. Compressed air is low cost, but "advanced" pressure containers are expensive to develop and test.

Compressed air, as an energy source, is only as "clean" as the fuel used to initially create the energy. Using coal to generate electricity, which is transformed into compressed gas and stored in compression tanks, is not any cleaner than using the coal-sourced energy directly.

Compressed air has safety concerns, as do most technologies. A catastrophic tank rupture is the biggest concern. Intelligent safety codes have made this a rare, occasional occurrence. However, it comes at the cost of increased container weight and safety devices, like pressure relief valves. A broken valve can send a tank shooting off like a bullet, or a misguided missile. High pressure containers are designed to be quite strong, and generally don't rupture during auto accidents. Compressed air in autos or aircraft has great potential, but the containers must be lightweight and compact.

A number of companies, since the 1990s, have made claims they were developing cars that run on compressed air, but curiously, there are none available. Despite solid evidence, it is inexpensive to recharge, leaves no roadside pollution, and uses a lubricant made of cooking oil.

The amount of time needed to refill an empty tank is important. Compressed air cars can fill their tanks almost instantaneously if a supply of compressed air is available. There is also the option of having a stationary compressor in your garage or a built-in, onboard compressor, but both of these situations may take several hours to recharge your vehicle. There is at least one air pressure car that claims you can use a gas station tire pump to recharge the tank in a few minutes.

Air storage systems offer a low power density and don't travel very far. It is the vehicle's high efficiency that makes it a good match for hybrid vehicles using a conventional internal combustion engine. The stored gas can be used for braking purposes and to optimize an engine's piston cycle, which does not run completely balanced during all RPM/power levels.

PSA Peugeot Citroën and Bosch have developed hybrid systems using hydraulics to transfer energy to and from a tank containing compressed nitrogen. They claim to have achieved a 45 percent reduction in fuel use. They claim the system is more affordable than competing electric cars and flywheel “KERS” systems.

Wind energy has become one of the leading renewable energy resources in the world. While there are complaints about noise and a lack of aesthetics, wind turbines continue generating clean, free energy.

However, as with solar power, the winds do not provide a steady, consistent source of electricity. Wind power is intermittent and is not a reliable source of kinetic energy. An additional problem exists in the engineering of wind turbines.

There are design limitations restricting the generation of electricity using wind power. First, the rotors of the turbine can capture just under 60% of the wind's kinetic energy. Second, current designs have a specific capacity corresponding to specific wind speeds. Faster wind speeds will not generate more electricity. The turbine will have peaked.

Jie Cheng, a doctoral student at the University of Nebraska-Lincoln, came up with an idea to help make wind turbines more efficient. He has designed a new type of wind turbine capable of dealing with these limitations. Cheng’s turbine design is able to produce an extra 16,400 kilowatt-hours per month, normally the amount of electricity used monthly by 18 average households.

The additional energy comes from what is called “mechanical spillage.” Mechanical spillage is the energy that is lost by the turbines after they peak during high wind speeds, preventing electrical and mechanical damage. Cheng's new prototype comes with an air compression tank, which is used to store the “spillage.”

The energy is stored as compression until the wind speeds lower and the wind turbines are operating at less than maximum capacity. The stored energy, in the form of compressed air, is released and converted into electricity by the turbines during times of no, or low, wind speeds.

According to Jie Cheng, his prototype would be useful in many parts of the world. He believes it would be useful where there are extreme winds, followed by times of calm.

Cheng's design uses a differential gearbox, which is a gear system allowing for the uneven transfer of power from the main shaft, to 2 “different” secondary shafts.

The Rotary Vane Machine includes an off-center shaft with spring-engaged vanes. The design creates a number of uneven spaces in its housing. The RVM is built into the system using the planetary gearbox as a way to recapture what would otherwise be excess, unused wind power. This unused power then generates electricity when the wind is insignificant.

When the switch valve is turned to the left, the inlet side of the RVM is open to the atmosphere, and the outlet is hooked up to a compressed air tank. The RVM works in compressor mode while the vanes are being driven by the shaft, and compresses the air to the outlet. When the switching valve is turned to the right, the tank's outlet air flow becomes reversed. The RVM acts as a crude expansion chamber, with the vanes being driven by compressed air, and turning the turbine to generate electricity.

Air tanks are used as a part of the storage component, working in harmony with the RVM. There are a large number of storage tank designs, with variations in the maximum allowable pressure. For a given volume and pressure, and a specific temperature, the maximum amount of energy stored in a tank can be calculated. The compressed air tank becomes a kind of storage battery.

The air tanks maintain a 95 percent capacity for electrical generation for the first 109 hours. When the wind is blowing in surplus mode, the RVM runs constantly as a compressor until the tank is full, storing the excess energy for later use. The RVM stops turning when there is insufficient wind and the storage tank is empty. Cheng believes his system is quite efficient and capable of returning its investment costs very quickly. He thinks the savings of electricity purchases, combined with the sale of exported electricity, will accomplish this goal.

Jie Cheng has proposed a unique and novel solution to storing the kinetic energy of the wind for later use. He uses a configuration integrating a compressed air storage system with a traditional wind turbine system. His system recycles the mechanical spillage previously ignored by traditional wind power designers and uses it to generate electricity at a time when it is needed.

Compared to traditional systems, Cheng's design increases the capacity of turbines to transform the kinetic energy of the wind into electricity and has the potential to maximize and streamline the overall electricity used by the grid. This design has great potential for improving the efficiency of the wind turbine industry.