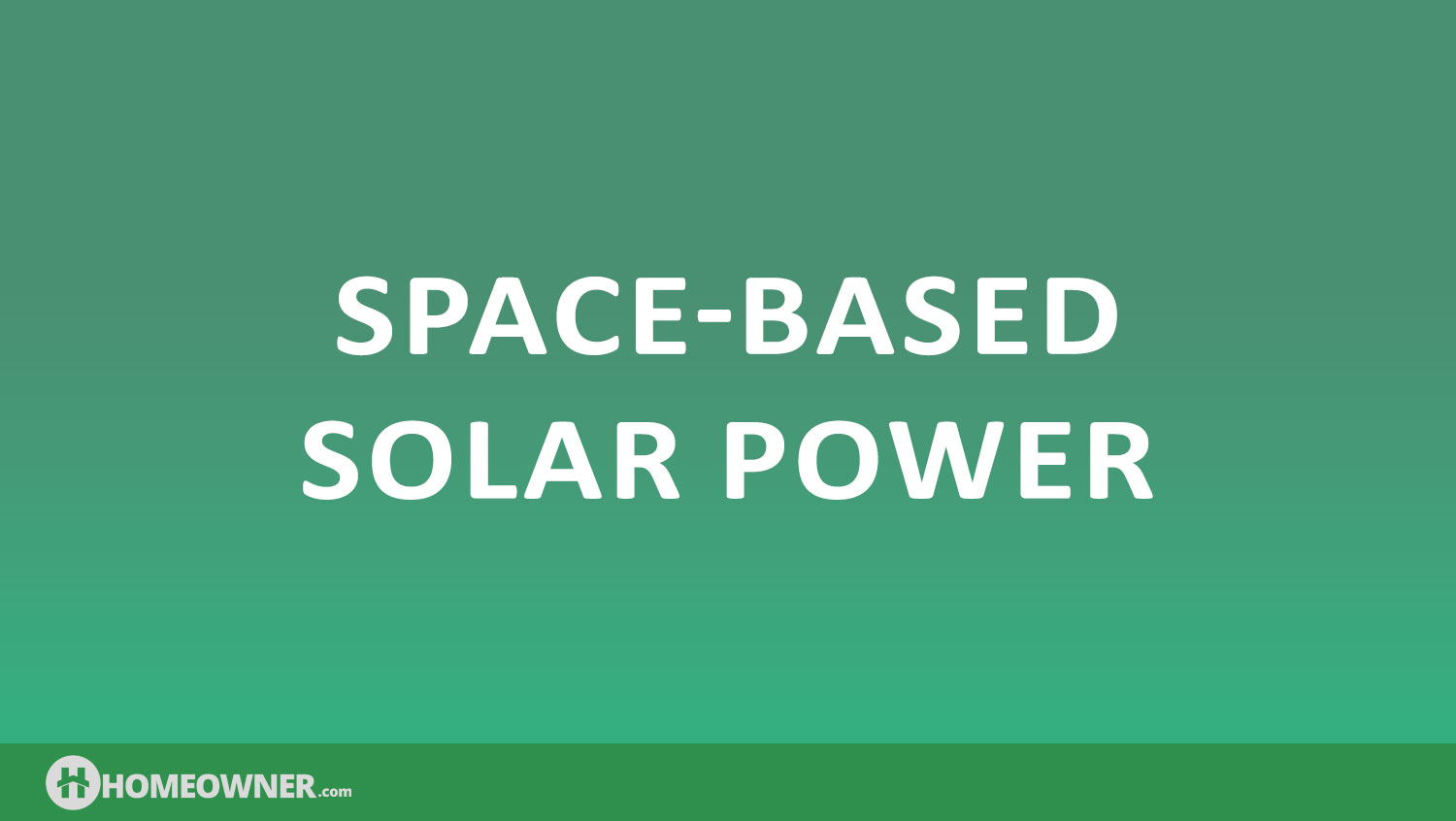 One of the major hurdles holding solar power back is the inherent intermittency issues that come with having an atmosphere over your head. Solar cells on the Earth's surface can only generate electricity when the sun is in the sky, and for many countries, especially those in the Northern hemisphere, constant cloud cover can put a damper on a solar economy.

But what if you could bypass the atmosphere altogether, what if you could harness solar energy directly from the sun, in space. In 1941, science fiction writer Isaac Asimov spoke of space stations that could transport energy gathered from the sun to various planets with microwave beams in his short story Reason.

Today, science fiction could become science fact within the next quarter of a century, at least according to Dr. Susumu Sasaki of the Japan Aerospace Exploration Agency (JAXA). In April of 2014 JAXA released a proposal for a series of ground and orbital experiments that could lead to the development of a functioning space-based solar power system by the 2030s.

The idea of collecting solar power in space is nothing new. It did not take long after the invention of the first silicon-based solar cells and the advent of space exploration for someone to realize that the two technologies would make a happy marriage.

American aerospace engineer Peter Glaser penned the first formal proposal for a space-based solar power system in 1968, just a year shy of Neil Armstrong's stroll across the moon. He was granted patent number 3,781,647 for a satellite solar power system (SSPS) in 1973 for a method of transporting solar power over long distances by beaming microwaves from an antenna in space onto a much larger one on the ground.

The ground receiver would later be called a rectenna. Glaser, who was vice president of Arthur D. Little, Inc. landed a contract with NASA to lead a more comprehensive study in 1974.

The initial report was enough to make NASA fund research and development into the project during the 70s and 80s. A change in administration would ultimately put a hiatus on further development of the idea. The Office of Technology Assessment concluded that there were too many unknowns regarding the technical and economic aspects of a space-based solar power system.

NASA would not take another serious look at space-based solar power until 1999, with its Space Solar Power Exploratory Research and Technology (SERT) program. They laid some of the groundwork for the solar power satellite (SPS) concept, using a geosynchronous orbit, and established general feasibility and design requirements. The SPS concept entailed a gigawatt space power system with an inflatable photovoltaic gossamer structure, which utilizes solar heat engines to generate electricity.

A key lesson that came out of this study was that launch costs for low earth orbit would have to fall to the $100 - 200 USD per kilogram range for the construction of an SPS to become feasible. Fast forward to May 2014 and JAXA is picking up where they left off. Let's take a closer look at the latest road map to space-based solar power.

The system would consist of a geosynchronous orbiting satellite outfitted with state of the art silicon-based solar cells.

Orbital mirrors ensure that sunlight is always concentrated onto the satellite's solar panels as it orbits with the Earth's rotation, even when it resides on the side of Earth opposite the sun. On the surface a 3 kilometer long man-made island outfitted with 5 billion miniature rectifying antennas receives the microwaves beamed down from a satellite 36,000 kilometers above, converting them back into DC current.

At the end of the 19th century, Nikola Tesla began construction of his famous 57-meter tower at Wardenclyffe on New York's Long Island North Shore. He intended to build a prototype transmission tower for wireless power, but budget cuts in 1904 and debt collectors would ultimately prevent him from realizing his dream.

Fast forward to the present and today we know that wireless transmission over long distances can be implemented in one of two methods: lasers and microwaves. But lasers are not feasible for space-based power transmission for the same reason we would want to place solar collectors above the atmosphere in the first place – the clouds would absorb or scatter the laser beam. If space-based solar is going to work, it has to be via microwaves.

How to Transfer Energy using Microwaves

The core technology that could make space-based solar power a reality is the ability to convert solar DC current into microwaves onboard the satellite, beam them down to earth, and convert them back into DC current on the ground. Let's start with generating microwaves on the satellite.

To generate microwaves, DC current supplied from a photovoltaic cell can be directed to magnetrons, klystrons, or other vacuum tubes to convert electricity into a microwave.

On the surface, a rectifying antenna or rectenna is required to receive the microwaves from space and convert them back into DC current. In its simplest iteration, a rectenna consists of a dipole antenna equipped with an RF diode. The microwaves induce an AC current in the antenna and the rectifier converts the AC current into DC power. This is where the 3 km long island of rectennas comes in.

The challenge of course is to directly hit the rectennas head on from the array of antennas 36,000 km in space. Aiming a precise beam of microwaves requires phase matching of an unprecedented scale. The phases of all 1 billion antennas on board the SPS would have to be able to match one another in order to create a beam that can precisely target the rectenna array down below.

JAXA's solution is to improve upon the use of a pilot signal sent from the rectennas on the ground to the antennas in space. Each antenna would match its phase to the pilot signal to create a tight beam of microwaves capable of hitting its target.

Laboratory tests have been able to achieve 80-95 percent power conversion on both ends. In an ideal scenario, that means you can have access to 90% of the energy harvested by the satellite on the ground. Experimental conversion rates are still more on the order of 54% in the field, so we have a lot of work to do before wireless power transmission becomes viable.

JAXA has already planned a series of demonstrations for the transmission of high power over large distances using microwaves. Researchers are planning to beam hundreds of watts over a distance of 50 meters. The demonstration unit will have four

panels that will move in relation to one another to resemble antenna motion in orbit.

Each 0.6 m x 0.6 m panel will use hundreds of tiny transmitting antennas and receiving antennas to detect the pilot signal and transmit 400 W carrying a total of 1.6 kW to the rectenna. If successful the receiving rectenna array should be able to generate 350 W of power, which would make it the first successful demonstration of both high power transmission and large distance.

Space transportation has seen a lot of press in recent years due to the success of companies like SpaceX, Virgin Galactic, and United Launch Alliance. As reusable rockets become a reality, automated docking systems improve, and the costs of launches go down, the feasibility of delivering materials to space for a large scale construction project becomes more realistic.

The construction of the International Space Station sets a precedent for how JAXA might be able to build its large SPS in space. Constructing modular pieces on the ground and assembling them in space is already within our capability.

We just need to make the trip to low earth orbit cheaper with reusable rockets and improved launch systems.

JAXA has come up with two concepts for the solar power satellite that could effectively harvest energy from the sun in Earth's orbit. The first, simpler of the two involves using gravity gradient stabilization to maintain the solar collector's position in Earth's orbit. The satellite would consist of one large panel on the top surface covered with photovoltaic cells and another large panel on the bottom surface covered with transmission antennas.

At the center between the two panels is the bus, the unit that houses the satellite's communication and control systems. The two panels are tethered to the bus by 10 km long cables. The panel closest to the Earth experiences slightly more gravitational pull than centrifugal force while the upper panel experiences slightly more centrifugal force than gravitational pull. The result is gravity gradient stabilization, a balance of forces that maintains the position of the satellite in Earth's geosynchronous orbit without the need for fuel, a huge cost-saving measure.

This basic configuration does have one glaring flaw; the solar collector's orientation is fixed and will lead to huge variations in power generation as the satellite matches the earth's spin. The second configuration, therefore, adds two giant free flying mirrors that keep sunlight directed at the solar panels 24 hours a day. The free flying mirrors would have to be able to fly in formation, and would require a significant upgrade from the docking maneuvers employed by space agencies today.

They would also have to be constructed out of a lightweight but strong material. It is far more likely that the first implementation would be used initially while formation flying technology and advanced materials are developed.

A space-based solar power system of this scale would require a substation on the ground to take the DC power generated from the rectenna array and convert it to AC power for the electrical grid. Fortunately, once the power reaches the substation, managing this DC load becomes a standard power plant operation. Submarine power cables would deliver the power from the man-made island to the city's electrical grid.

The Future of Space-Based Solar

Critics of a space-based solar power system are primarily concerned with the inherent loss of efficiency incurred by the conversion path from a photon to DC current on the ground. The overall losses in efficiency add up at each step of the conversion process.

Still, the atmosphere coupled with intermittency issues from weather and nightfall is enormous, and could be greater than the power lost from wireless power transmission. SPSs are especially attractive to places like Japan with limited land and a lack of fossil fuels.